Manchester City manager Roberto Mancini admits he is unhappy with the club's sporting director Brian Marwood after he failed to make the signings needed to improve the Premier League champions. 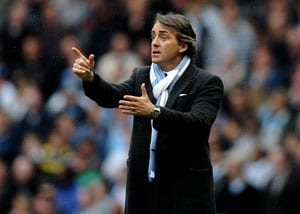 Manchester City manager Roberto Mancini admits he is unhappy with the club's sporting director Brian Marwood after he failed to make the signings needed to improve the Premier League champions.

Mancini had already revealed his frustration at City's slow progress in the transfer market earlier in pre-season and the Italian reopened the rift with Marwood ahead of Sunday's Community Shield clash with Chelsea.

After leading City to their first English league title for 44 years last season, Mancini was keen to bolster his squad from a position of strength and has earmarked moves for Arsenal forward Robin van Persie, Liverpool defender Daniel Agger and Roma midfielder Daniele di Rossi.

But Marwood is in charge of City's transfer negotiations and the former Arsenal winger has been unable to seal a deal for any of Mancini's top targets, with the van Persie move looking increasingly unlikely to come to fruition.

With the new Premier League season just over a week away, Mancini's irritation at the situation resurfaced on Friday.

"I am not happy," said Mancini, when asked what he thought of City's transfer policy.

"After three months or four months I don't know what to say about this situation."

Mancini is happy with his current squad but it is clear he feels further improvement is required to hold off renewed challenges from Manchester United and Chelsea.

"It is my opinion that we have a good team. But we built this team two years ago and you need to continue to improve in every way," Mancini said.

It is believed Marwood is keen to offload players before making signings as City prepare for UEFA's financial fairplay rules to come into effect.

Although Wayne Bridge has gone on loan to Brighton, City are funding a large percentage of his wages.

A deal is in place for Emmanuel Adebayor to join Tottenham but the Togo striker's wage demands remain a stumbling block.

To add insult to injury for Mancini there has been interest in members of his squad that he does not want to lose, including Italy striker Mario Balotelli.

Balotelli was one of his country's best players at Euro 2012 as Italy reached the final, where they were beaten by Spain, and Mancini has been determined to keep hold of the talented but temperamental star.

"This summer, we had a lot of requests for him," Mancini said. "Many important teams wanted him. This is a sign that he is a top player.

"I didn't think about saying yes because he is young and we are sure he can improve and be an important player for the club."

Comments
Topics mentioned in this article
Football Inter Milan Manchester City Alex Ferguson Mark Hughes English Premier League
Get the latest updates on ICC T20 Worldcup 2022 and CWG 2022 check out the Schedule, Live Score and Medals Tally. Like us on Facebook or follow us on Twitter for more sports updates. You can also download the NDTV Cricket app for Android or iOS.