Champions Manchester City remain United's nearest rivals after a 3-0 success at home to Stoke City, while Tottenham Hotspur climbed to third by coming from behind to defeat second-bottom Reading 3-1 at White Hart Lane. 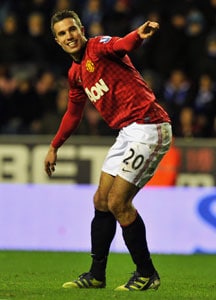 Manchester United kept a firm grip on the Premier League title race by sweeping to a 4-0 win at Wigan Athletic on the first day of 2013 to maintain their seven-point lead.

Champions Manchester City remain United's nearest rivals after a 3-0 success at home to Stoke City, while Tottenham Hotspur climbed to third by coming from behind to defeat second-bottom Reading 3-1 at White Hart Lane.

Javier Hernandez had already had a goal ruled out for offside at the DW Stadium when he put United 1-0 up against Wigan by tapping in after Ali Al Habsi saved from Patrice Evra in the 35th minute.

Robin van Persie got off the mark for the New Year eight minutes later, collecting a pass from Hernandez and sending Ivan Ramis to the turf with a dummy before curling the ball inside the right-hand post.

Hernandez added a third in the 63rd minute, swivelling to dispatch a half-volley when a van Persie free-kick arrived at his feet, before the Dutchman completed a brace of his own in the 88th minute with his 16th league goal of the campaign.

"Van Persie's first goal was magnificent. We expected him to be a major player and add something to us, and that's exactly what he's done."

City dominated the early stages at home to Stoke, who had gone into the game looking to protect a 10-match unbeaten run.

Pablo Zabeleta broke the deadlock two minutes before half-time, rolling the ball into an empty net after visiting goalkeeper Asmir Begovic touched away James Milner's low cross with his foot.

Sergio Aguero was the creator of City's second in the 56th minute with a low drive that was parried by Begovic, only for Edin Dzeko to turn the loose ball home.

Aguero scored a 74th-minute penalty after Steven Nzonzi was adjudged to have tripped David Silva, but the Argentine had to leave the fray moments later after appearing to sustain a hamstring injury.

City assistant coach David Platt said that Aguero would "certainly" miss Saturday's FA Cup third-round tie with Watford and was "doubtful" for the following weekend's trip to Arsenal in the league.

Tottenham fell behind in the fourth minute against Reading when Pavel Pogrebnyak headed the visitors in front, but Michael Dawson's header meant the hosts were level within five minutes.

Spurs were dominant from then on, Emmanuel Adebayor putting them in front with a powerful 51st-minute header before Clint Dempsey's fortuitous deflected strike made it 3-1.

Victory took Spurs a point clear of Chelsea, who have two games in hand and host bottom club Queens Park Rangers on Wednesday.

"We did well to close out the festive period with 10 points from four games and hopefully we will continue this form to put ourselves in the position we want to be," said Spurs coach Andre Villas-Boas.

Arsenal were prevented from making ground on the top four after their four-game winning run came to an end in a 1-1 draw at Southampton that left Arsene Wenger's side four points below Chelsea in fifth place.

Gaston Ramirez exploited some calamitous Arsenal defending to put Southampton ahead in the 34th minute, but a Guly do Prado own goal meant the visitors were level before half-time.

The point was nonetheless enough to take Nigel Adkins' side out of the bottom three at Wigan's expense.

Aston Villa put an end to a run of three straight defeats with a 2-2 draw at Swansea City, but were denied victory by a 95th-minute goal from Danny Graham.

Christian Benteke had put Villa ahead with an 84th-minute penalty, after Wayne Routledge's ninth-minute opener for the hosts had been cancelled out by Andreas Weimann.

West Ham United were also on the up, beating Norwich City 2-1 through goals from Mark Noble and Joey O'Brien to climb to 11th.

Earlier, Fulham shook off their slumbers from 2012 to win 2-1 at West Bromwich Albion and record only their second win in 13 matches.

Fulham striker Dimitar Berbatov had the honour of scoring the first goal of 2013 at the Hawthorns, with Alex Kacaniklic netting a 58th-minute winner after Romelu Lukaku equalised early in the second half.

Comments
Topics mentioned in this article
Football Arsenal Manchester City Manchester United Chelsea Wayne Rooney Mark Hughes Alex Ferguson English Premier League
Get the latest updates on ICC T20 Worldcup 2022 and CWG 2022 check out the Schedule, Live Score and Medals Tally. Like us on Facebook or follow us on Twitter for more sports updates. You can also download the NDTV Cricket app for Android or iOS.