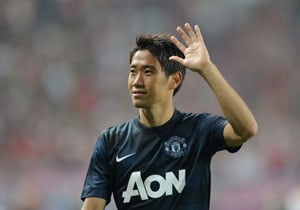 Kagawa, who moved to Old Trafford from Borussia Dortmund a year ago, also delighted a sell-out crowd of 44,856 at the Nagai Stadium by scoring United's first goal minutes after fluffing a penalty by kicking straight into the hands of Osaka custodian Kim Jin-Hyeon.

The Red Devils now have two wins and two defeats in Asia after losing to the Thai league all stars 1-0 two weeks ago in Bangkok, overwhelming the A-League All Stars in Sydney and again bowing to the J-League's Yokohama Marinos last Tuesday.

Cerezo striker Kenyu Sugimoto opened the scoring on 34 minutes as he beat two defenders to slam a left-footer past Lindegaard after intercepting a pass by United's Chris Smalling.

United nearly levelled in the 40th minute when Kagawa struck over after Dutch striker Robin van Persie fed him a sharp cross on a rebound from a Danny Welback shot off the left post.

Kagawa bungled a penalty shot in the 53rd minute when Ashley Young was clipped down in the box by Cerezo defender Tatsuya Yamashita.

But the 24-year-old Japanese quickly restored some pride by pulling one back for United two minutes later, slotting the ball through Kim's legs after trapping a deep left cross from Ryan Giggs.

Minutes after Kagawa was substituted amid roars from his former home supporters, Cerezo surprised the English champions with their second goal through 18-year-old striker Takumi Minamino on 63 minutes.

Minamino's shot from the left outside the area sailed into the top far side corner. But Zaha managed to redeem the visitors and save them from humilation by hitting a much needed equalizier one minute into stoppage time on a cross from Jesse Lingard.

For the last match of their Asian tour the English champions will play Kitchee FC in Hong Kong on Monday and wind up their entire pre-season campaign with a friendly against Swedish outfit AIK Fotboll in Stockholm on August 6.

United under David Moyers -- who was appointed as long-reigning Alex Ferguson's successor at the end of last season -- will open their title defence against Swansea City away on August 17.