Manchester United drew against Newcastle while Callum Wilson plundered a hat-trick as promoted Bournemouth won 4-3 at West Ham United in an incident-packed game to claim a first ever top-flight victory. 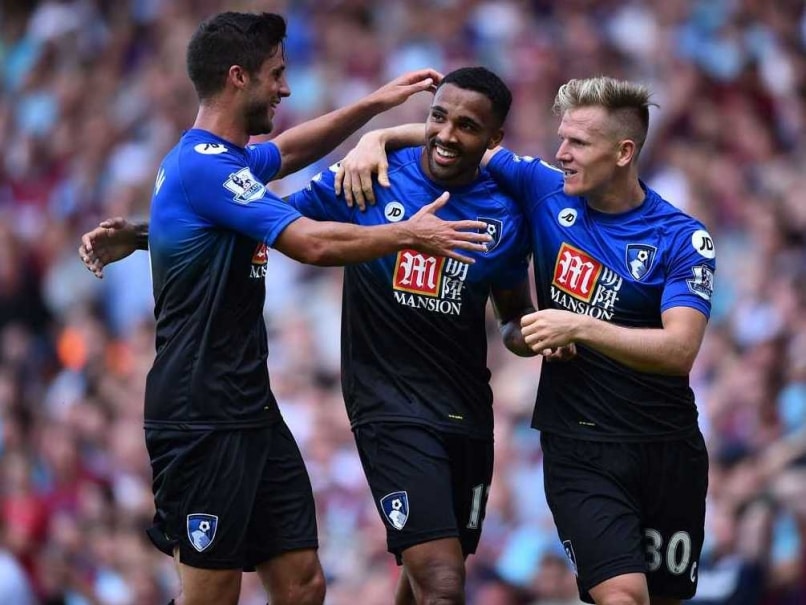 Manchester United's winning start to the Premier League season ended on Saturday as they were held to a frustrating 0-0 draw by Newcastle United at a sun-soaked Old Trafford.

The hosts, who gave Bastian Schweinsteiger a full debut, dominated the early stages and Wayne Rooney saw a goal ruled out for a tight offside, but Newcastle went close when Aleksandar Mitrovic headed against the bar. (Gallery)

Louis van Gaal's side laid siege to the Newcastle goal in the second half, Tim Krul saving from substitute Javier Hernandez and Chris Smalling heading against the post, but Newcastle debutant Florian Thauvin was inches away from toeing in a late winner at the other end.

"We can be satisfied with the performance, but not with the result. We were unlucky," said United manager Van Gaal, whose side have scored only two goals in their three league games to date.

"We did not make the right choices in the final third, but we played fantastic as a team. I like these kind of games when we work like this, but not this result.

"The performance was one of the best in my period, but we don't reward ourselves. There was only one club that wanted to win and that was us."

United had won their opening two league games 1-0, against Tottenham Hotspur and Aston Villa, before beating Club Brugge 3-1 in the first leg of their Champions League play-off in mid-week.

But they were let down by both their final ball and their finishing against Steve McClaren's Newcastle, leaving captain Rooney without a goal in his last 10 club games.

After Rooney had seen his effort disallowed, Krul saved from Memphis Depay, Rooney and Juan Mata, before Mitrovic, making his fully debut, outjumped Matteo Darmian and headed Chancel Mbemba's cross against the bar.

Van Gaal introduced Michael Carrick, Hernandez and Antonio Valencia in the second half and Krul had to save from Luke Shaw before spreading himself brilliantly to block a close-range effort from Hernandez.

United conceded top spot to Leicester City, who moved above them on goal difference after a 1-1 draw at home to Tottenham.

Delle Ali headed in a cross from Nacer Chadli to give Spurs an 81st-minute lead at the King Power Stadium, but within a minute Riyad Mahrez had cut in from the right and curled home his fourth goal of the season to level.

Elsewhere, Callum Wilson plundered a hat-trick as promoted Bournemouth won 4-3 at West Ham United in an incident-packed game to claim a first ever top-flight victory.

Wilson exploited a pair of errors by Aaron Cresswell to score twice in the opening 28 minutes, only for a Mark Noble penalty and a Cheikhou Kouyate rebound to draw West Ham level early in the second period.

But substitute Marc Pugh restored Bournemouth's lead and Wilson completed his hat-trick from the spot after Carl Jenkinson had been sent off, before Modibo Maiga hit back for West Ham.

Debutant Bakary Sako struck in the 87th minute to give Crystal Palace a 2-1 win at home to Villa, who had been in line for a point after a Pape Souare own goal cancelled out Scott Dann's header.

Bottom club Sunderland stopped the rot after two straight defeats by drawing 1-1 at home to Swansea City, with Jermain Defoe equalising for the hosts after Bafetimbi Gomis had scored his third goal of the campaign.

Record signing Xherdan Shaqiri created an early goal for Mame Biram Diouf on his Stoke City debut, but his side had to settle for a 1-1 draw at Norwich City due to Russell Martin's 28th-minute equaliser.

Comments
Topics mentioned in this article
Manchester United West Ham United Newcastle United Leicester City English Premier League Callum Wilson Football
Get the latest updates on ICC T20 Worldcup 2022 and CWG 2022 check out the Schedule, Live Score and Medals Tally. Like us on Facebook or follow us on Twitter for more sports updates. You can also download the NDTV Cricket app for Android or iOS.