After appearing set to cruise to the title for most of the season, Chelsea now face a nerve-jangling final six matches as they try to hold off a strong challenge from Tottenham Hotspur. 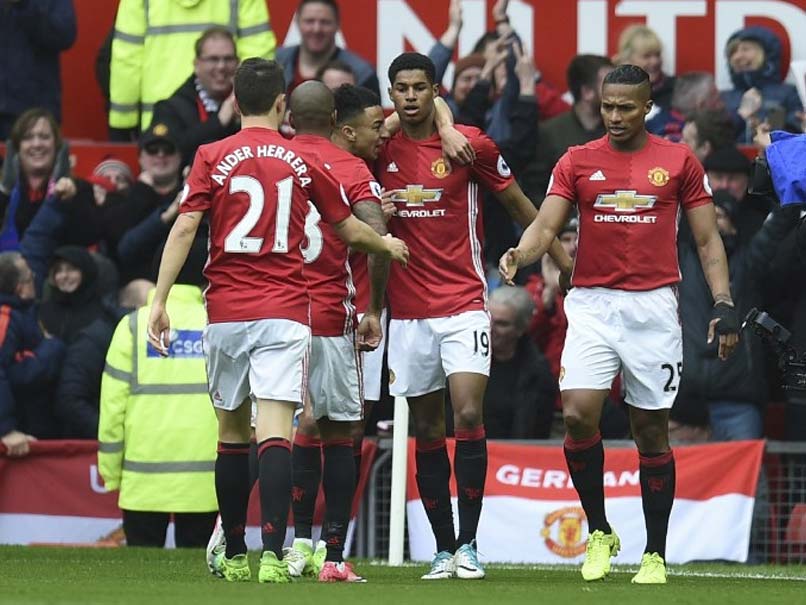 Manchester United blew the Premier League title race wide open with a 2-0 win over lethargic leaders Chelsea, while Liverpool are back in third place after a 1-0 victory at West Bromwich Albion on Sunday. Antonio Conte's Chelsea side were rocked by Marcus Rashford's early goal and a deflected Ander Herrera strike soon after half-time at Old Trafford delivered a major blow to their Premier League title ambitions. The Blues barely managed an attack of note and a second defeat in their last four league games leaves them clinging to a four-point lead over second placed Tottenham, who had piled on the pressure with a 4-0 rout of Bournemouth on Saturday.

After appearing set to cruise to the title for most of the season, Chelsea now face a nerve-jangling final six matches as they try to hold off a strong challenge from their London rivals.

It was a sweet moment for United manager Jose Mourinho, who had suffered a 4-0 thrashing against Chelsea in October on his first return to the club since being sacked last season.

United were also knocked out of the FA Cup quarter-finals by Chelsea last month and avenging those painful losses kept alive their bid to qualify for the Champions League via a top four finish.

Mourinho's men, unbeaten in their last 22 league games, are now fifth, four points behind fourth placed Manchester City with a game in hand.

Chelsea's cause wasn't helped by the absence of goalkeeper Thibaut Courtois, who was injured earlier in the week, and the pre-match withdrawal of left wing-back Marcos Alonso due to a reported illness.

And the Blues looked less solid than usual at the back as United carved them open to take the lead in the seventh minute.

It was a goal rooted in controversy from Chelsea's point of view as United midfielder Herrera appeared to handle to win back possession.

Even so, Chelsea defender David Luiz was still exposed too easily by Herrera's precise pass, with Rashford allowed to gallop clear before slotting a cool finish under Asmir Begovic for his ninth goal of the season.

United, whose leading scorer Zlatan Ibrahimovic started on the bench, were rewarded for a vibrant display when they struck again in the 49th

Ashley Young's persistence opened space for Herrera and the Spaniard's shot from the edge of the penalty area deflected off Chelsea defender Kurt Zouma before looping over Begovic.

At the Hawthorns, Liverpool playmaker Roberto Firmino settled a scrappy game with a close-range header in first half stoppage-time to condemn Albion boss Tony Pulis to his first ever home league defeat against the Reds.

The Brazilian converted a flick-on from Lucas Leiva to seal Liverpool's fifth win in their last seven games.

Liverpool are unbeaten since losing at Leicester in late February and now lead City by two points, although Pep Guardiola's team have a game in hand in the race for an automatic spot in the Champions League group stage.

With United, Arsenal and Everton also still in contention for a top four finish, Liverpool boss Jurgen Klopp isn't getting carried away just yet.

"It is the Premier League, Arsenal have three games in hand so we should not think about this," Klopp said.

"Today we could only get to 66 points, so it feels perfect. Next week we try at Anfield to get 69, and let's carry on.

"If we do what we have to do we will be where we want to be."

Comments
Topics mentioned in this article
Manchester United Chelsea Liverpool West Bromwich Albion English Premier League Football
Get the latest updates on ICC T20 Worldcup 2022, check out the Schedule and Live Score. Like us on Facebook or follow us on Twitter for more sports updates. You can also download the NDTV Cricket app for Android or iOS.