Former Barcelona and Bayern Munich boss Louis van Gaal will get his first taste of the Premier League this weekend and Tom Cleverley claims Manchester United are ready to show the benefits of the Dutchman's work on the training ground. 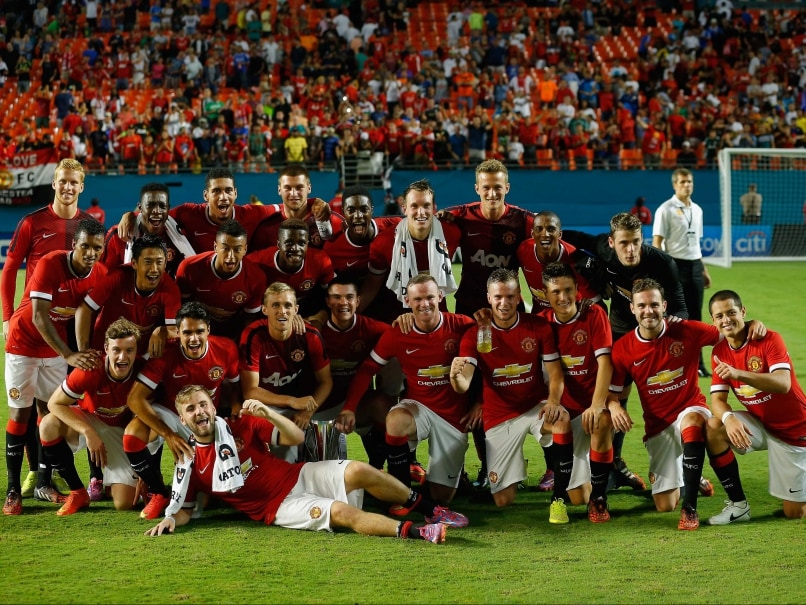 Manchester United pose for a photograph following their victory over Liverpool in the Guinness International Champions Cup 2014 Final.© AFP
Manchester:

Manchester United midfielder Tom Cleverley believes Louis van Gaal's side will provide an early glimpse of their new manager's swaggering style in the Premier League opener against Swansea on Saturday.

United kick off the domestic campaign seeking to drastically improve on last season's dismal campaign and Cleverley is confident his team will make a fast start at Old Trafford. (Also Read: EPL Returns With a Stronger Man United)

Van Gaal has been charged with clearing up the mess left by his predecessor David Moyes, who was sacked as United slumped to seventh place -- their lowest ever finish in Premier League history and their worst since 1990.

Former Barcelona and Bayern Munich boss Van Gaal, who led the Netherlands to the recent World Cup semi-finals, will get his first taste of the Premier League this weekend and Cleverley claims United are ready to show the benefits of the Dutchman's work on the training ground.

"And the manager is so clear that there can be no questions asked from our point of view.

"It'll be the manager's first competitive game and I'm sure it'll be a special atmosphere."

Cleverley was targeted by a section of the United supporters last season as he bore the brunt of some of the team's failings under Moyes.

And he claims there is a determination in the United squad to make amends, starting with the visit of Garry Monk's side.

"We can't wait to get going against Swansea and look to put right the wrongs from last year," Cleverley added.

"This club has always been renowned for bouncing back from sticky patches and that's one of the reasons it's so loved around the world.

United will have to do without England left-back Luke Shaw for the match after the £30 million signing from Southampton was ruled out of the first month of the season with a hamstring injury.

With Patrice Evra having joined Juventus, van Gaal is poised to ask 20-year-old Reece James to step up and make his first competitive appearance after a solid pre-season. Spanish midfielder Ander Herrera, another of van Gaal's new signings, will make his debut with Michael Carrick ruled out with an ankle injury.

Meanwhile, Swansea midfielder Ki Sung-Yueng expects United to be a much tougher prospect under van Gaal.

"It is going to be different from last season," Ki said. "They were struggling last year, but this season they are much stronger.

"They have a new manager and they are one of the best teams in the Premier League even though they finished lower last season."

Ki also admits he is relishing the opportunity to get his career at Swansea back on track after being frozen out by former boss Michael Laudrup, who sent him to Sunderland on loan.

"It was weird," said the South Korea international. "The first season was not my best, but I was satisfied as it was my first season in the Premier League.

"I expected that my second season would be better than the first, but suddenly Laudrup brought in some players and he didn't give me the opportunity to play.

"Inside my heart last season was not easy as I was watching Swansea's games and supporting them, but I was playing for Sunderland trying to win games for them."

Monk has been boosted by the return of midfielder Nathan Dyer and winger Wayne Routledge for the trip to Old Trafford.

The pair missed Swansea's final pre-season game against Villarreal last weekend, Routledge through injury and Dyer due to the birth of his son, but both are set to feature against United.

Comments
Topics mentioned in this article
Tom Cleverley English Premier League Manchester United Football
Get the latest updates on ICC Women's Cricket World Cup 2022 and IPL 2022, check out the Schedule , Live Score and IPL Points Table. Like us on Facebook or follow us on Twitter for more sports updates. You can also download the NDTV Cricket app for Android or iOS.