Manchester United knocked off summit after losing at Norwich

Norwich inflicted Manchester United's third loss in the English Premier League on Saturday, winning 1-0 to ensure that Alex Ferguson's side was overtaken atop the standings by Manchester City. 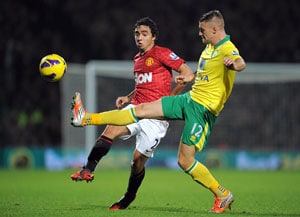 Norwich inflicted Manchester United's third loss in the English Premier League on Saturday, winning 1-0 to ensure that Alex Ferguson's side was overtaken atop the standings by Manchester City.

"It's a great day for Norwich and it's a massive win for us," Pilkington said. "We've been performing well over the last couple of weeks and we showed today that we could beat the team that is probably the best in the league."

United fell one point behind champion City, which routed Aston Villa 5-0 earlier in the day, while Norwich moved five points clear of the drop zone.

"We're disappointed to lose the game but we have to give credit to Norwich for the way they fought and battled for every ball on the pitch," Ferguson said. "They defended fantastically well and the goalkeeper also had a really good night so it's disappointing ... they deserved the win just because they worked so hard for it.

"The players are used to making comebacks and we're always a threat in the last minutes of matches. We had a lot of half-chances but it just wasn't our night."

Without striker Wayne Rooney because of tonsillitis, the Red Devils produced a largely lackluster display as Norwich produced another composed effort to secure a third win in five EPL games.

But it was a lively start by United as Robin van Persie created the first opening inside three minutes, turning to drive in a low shot from the edge of the Norwich penalty area which goalkeeper John Ruddy palmed away low to his right.

United continued to have all the possession, and enjoyed plenty of time on the ball as the home side sat deep.

Norwich, though, showed some life in attack when Hoolahan floated a ball over from the left, which winger Robert Snodgrass diverted just over the angle with a backward header.

A sweeping move switched play from the right out to Pilkington, who then released left back Javier Garrido, and his low center flashed across the face of Anders Lindegaard's goal.

Norwich grew in confidence and it needed a saving tackle from Chris Smalling to prevent captain Grant Holt from tapping in Snodgrass' low cross after the Scotland winger got past Rio Ferdinand into the right side of the United penalty area.

Then, Ryan Giggs, who scored a last-minute winner here last season, floated in a fine ball behind the Norwich backline, but Van Persie missed his kick when attempting an acrobatic volley.

At the end of the first half, Young drilled in a low effort at the back post from a corner, which Ruddy turned behind from point-blank range.

After the break, Norwich was on top and was rewarded on the hour with a goal of real quality.

Garrido was played in on the overlap down the left by Hoolahan, and his perfectly weighed cross was glanced over Lindegaard into the top corner by Pilkington.

Ferguson had seen enough and within 10 minutes veteran midfielder Paul Scholes, who turned 38 on Friday, and England striker Danny Welbeck were off the bench, replacing Antonio Valencia and the ineffective Javier Hernandez.

It didn't make a difference as Norwich claimed another big win this season, having beaten Arsenal a month ago.

Comments
Topics mentioned in this article
Football Arsenal Chelsea Manchester United Wayne Rooney Manchester City Alex Ferguson Mark Hughes Norwich City Didier Drogba English Premier League
Get the latest updates on India vs Australia Series, check out the India vs Australia Schedule for 2020-21 and Ind vs Aus live score . Like us on Facebook or follow us on Twitter for more sports updates. You can also download the NDTV Cricket app for Android or iOS.