Second placed City took advantage of United's slip, with Carlos Tevez netting the winner against Wigan while Chelsea climbed to third place with a 3-0 win at west London neighbours Fulham. 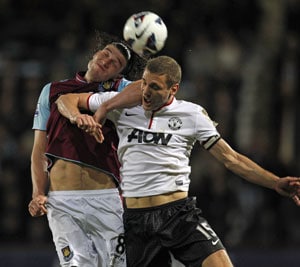 Manchester United may have to wait a little longer to reclaim the Premier League title after being held to a 2-2 draw at West Ham, while Manchester City won 1-0 against Wigan on Wednesday.

Alex Ferguson's team were below their best for long periods at Upton Park and needed Robin van Persie's late strike to rescue a point.

That allowed the champions to close the gap on the leaders to 13 points, meaning Ferguson's club can only win their 20th title in the next round of fixtures if City lose at Tottenham on Sunday and United beat Aston Villa on Monday.

"We had to stand up to a lot, we went down twice but we kept going. We played like champions tonight," Ferguson said.

"It's one more game away, that's five left. We're determined to win, we don't like losing and they showed that tonight again."

It was Sam Allardyce's team who looked more motivated in the early stages and they took the lead in the 16th minute.

Andy Carroll met Matt Jarvis's cross with a header down to Ricardo Vaz Te and the striker headed in from close-range for his first goal since October.

Ferguson's team drew level in the 31st minute when Shinji Kagawa skipped through the Hammers defence and crossed for Antonio Valencia to tap in his first goal of the season.

There was no sign of an improvement in Ferguson's mood when West Ham moved ahead thanks to Senegal midfielder Mohamed Diame's brilliant curling strike from the edge of the area.

But van Persie earned United a share of the spoils when he fired into the roof of the net after Kagawa's shot hit both posts and rebounded to the Dutch forward, who looked to be in an offside position.

At Eastlands, City had to ride their luck before making the most of United's sloppy display.

Wigan reached the FA Cup final for the first time in their history after beating Millwall on Saturday and they took the game to Wembley opponents City in the first half.

But City made it five wins from their last six matches when Argentina forward Tevez lashed into the top corner in the 83rd minute.

The defeat left Wigan stuck in the relegation zone and three points from safety but with a game in hand of their rivals.

"I was not frustrated. It was a difficult game because we played three days ago and Wigan play good football," City manager Roberto Mancini said.

"We were so tired and didn't play well in the first half. In the second half we started so so but in the last 20 minutes we finished well."

Noting that United had enjoyed a stroke of luck with van Persie's goal, Mancini added: "If they hadn't scored an offside goal it would be even fewer points."

Rafael Benitez's team bounced back from the disappointment of Sunday's FA Cup semi-final defeat against Manchester City in emphatic fashion.

"Obviously to win is very important and to win with a clean sheet and with three goals is important," Benitez said.

"We won in a derby as well so there are lots of positives today."

Brazilian defender David Luiz marked his 100th Chelsea appearance by opening the scoring in the 30th minute with a superb long-range strike.

And Chelsea captain Terry, back in the starting line-up along with Frank Lampard after both missed the semi-final, headed in the second from Juan Mata's cross two minutes before half-time.

Terry struck again in the 71st minute with a header from Fernando Torres's cross.

The Blues are one point ahead of fourth placed Arsenal and three ahead of fifth placed Tottenham in the race to qualify for the Champions League.