Manchester United edged out fifth-placed West Ham 1-0 thanks to Craig Dawson's own goal to remain a point ahead of Leicester. 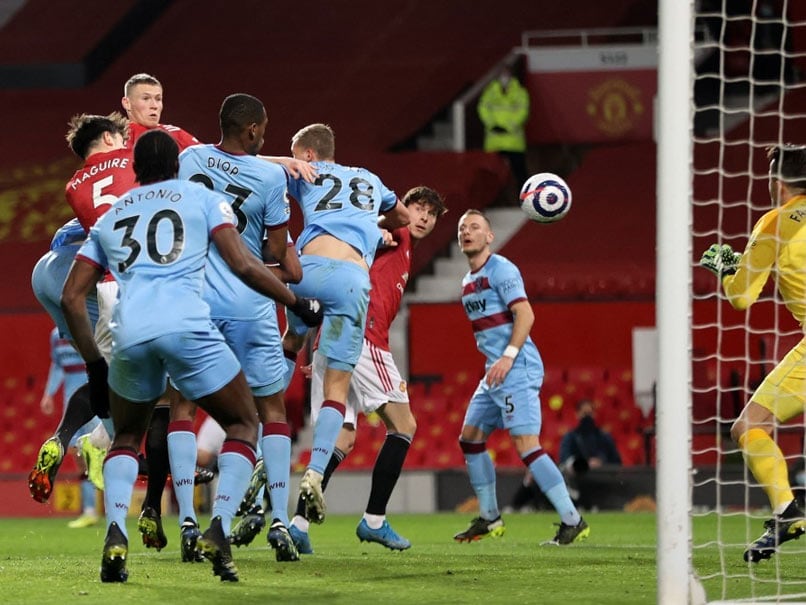 Victory over West Ham moved Manchester United back above Leicester into second.© AFP

Manchester United tightened their grip on a return to the Champions League next season with a 1-0 win over West Ham on Sunday, but midfielder Scott McTominay lamented letting Manchester City storm clear at the top of the Premier League. Victory over the fifth-placed Hammers moved United back above Leicester into second in the table and closed the gap on the runaway leaders to 14 points. City have won 17 of their last 18 league games with their only defeat in that run coming against Ole Gunnar Solskjaer's men last weekend.

But United eased their local rivals' route to a third title in four years with a run of just two wins in eight games in prior to winning the Manchester derby.

"It's difficult to look at top four at the minute because we had a time when we were looking at the league," said McTominay, who was the closest United player to Craig Dawson when the West Ham defender headed into his own net for the only goal at Old Trafford.

"It was the chance for all of us to have a big push and show really what good players we are, but Man City have had a terrific run of games and we're just trying our best to keep on them."

Despite also having a game in hand on City, the Red Devils are unlikely to haul in Pep Guardiola's men but do now enjoy a nine-point cushion over West Ham in the battle for Champions League places.

"It was a big weekend for us," said Solskjaer as Chelsea, Everton and Tottenham also lost ground in the top-four race over the past two days.

"This is a big three points because we know West Ham are challenging to get into the top four."

Former United boss David Moyes has failed to win in 15 attempts as the visiting manager at Old Trafford and the Scot was left to rue an overly cautious approach before falling behind early in the second half.

Without the ineligible Jesse Lingard, who is on loan from United, Moyes also dropped Pablo Fornals and Said Benrahma as club captain Mark Noble returned with full-back Ben Johnson playing in a more advanced midfield role.

"The way we set up didn't quite work," said Moyes. "We never really got up the park."

The home side were without the firepower of Anthony Martial and Edinson Cavani due to injury, so Mason Greenwood got the chance to lead the line and came closest to opening the scoring in a first half of few chances.

Greenwood's fierce left-footed shot was brilliantly turned onto the post by Lukasz Fabianski as the 35-year-old Pole showed why he was handed a new one-year contract this week.

There was nothing Fabianski could do to stop the only goal as Dawson's header flashed into his own net from Bruno Fernandes's corner eight minutes into the second period.

Moyes sent on Manuel Lanzini and Benrahma for the final 28 minutes and West Ham finally came to life as an attacking force.

As the visitors pushed forward, though, United became more dangerous on the counter-attack and Greenwood smashed against the post for a second time after a lung-bursting run from inside his own half.

The second goal did not come for the hosts, but an improved defensive record has been key to another season of progress under Solskjaer, which is reportedly set to see the Norwegian rewarded with a new contract.

United held out for a fourth consecutive Premier League clean sheet to close in on the much-needed resources of Champions League football next season after a full year without crowds at their 75,000 capacity home.

West Ham United Craig Dawson English Premier League Football
Get the latest updates on IPL Auction 2023 and check out  IPL 2023 and Live Cricket Score. Like us on Facebook or follow us on Twitter for more sports updates. You can also download the NDTV Cricket app for Android or iOS.