It was the dream of dreams, as I sat among 75,000 fans, watching the two Manchester giants clash before my eyes, from the Sir Alex Ferguson Stand. 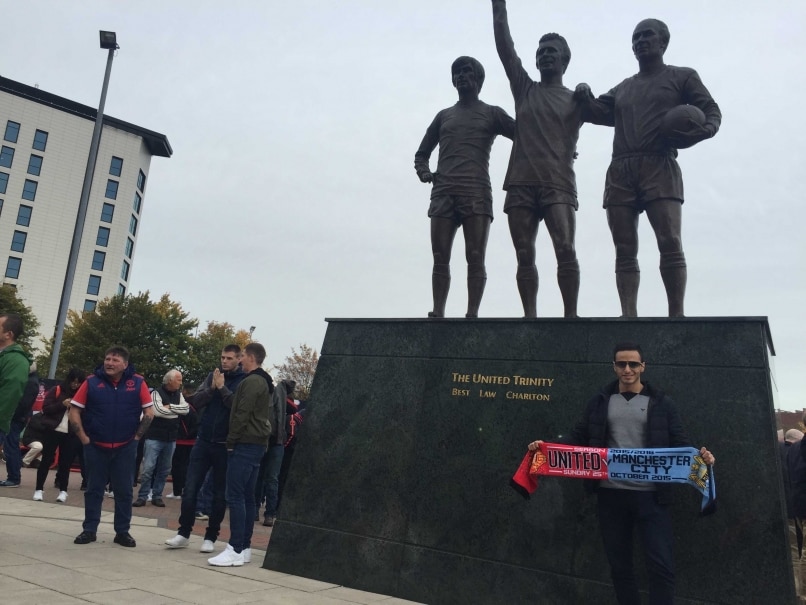 United Trinity refers to the Manchester United trio of George Best, Denis Law, and Bobby Charlton who helped the Red Devils become the first-ever English club to win the European Cup in 1968.© NDTV

It was the big day. Sleep deprived and exhilarated, I thought of Ronaldo and Best, Busby and Charlton, on the train from London Euston to Manchester Piccadilly.

The compartment was full of fans in red, engaging in fervent discussions about the season. They were all making a journey to Old Trafford, as was I. A boyhood dream was to come true, I was to watch the Manchester derby at The Theatre of Dreams.

Leading up to the stadium, there were ridiculously long queues outside the pubs. The Bishop Blaize, considered sacred by the Old Trafford faithful resembled a shrine, with fans desperate to grab a pint. The ones that managed to get in sang hymns of Manchester United's glory. They all were awaiting the team news, eager to know which of their heroes were to step into battle.

As I made my way inside the stadium, my heart started racing. Flashes of Rooney's overhead kick and Van Persie's stoppage time winner sent shivers through my body. On taking my seat, I could sense that I wasn't the only one nervous. But chants of 'United, United' erupted, as the two teams made their way to the pitch, while the Rocky theme played in the backdrop. This fixture meant so much to both sets of fans. Their passion reverberated through Old Trafford. The bad blood between them was apparent, as the home fans booed every single City player, as the announcer introduced their names.

A mammoth roar welcomed the referee's whistle, signaling kick-off. The atmosphere was special, as United dominated the opening exchanges. The fans got behind the home team, hoping for a moment that would make their long trips memorable. United continued having more possession but couldn't quite consolidate. As half time approached, some fans made a quick dash to the bars, to beat the rush that was soon to follow. The others continued chanting, till the referee blew for half time. They were upbeat following United's performance. "We'll have them easy", said one United fan, as he returned to his seat for the second half.

The stadium almost erupted, as Smalling headed the ball across the face of goal, early into the second half. To the United fans, the game was theirs for the taking. Their belief grew stronger with every chance that United created. United, however, failed to capitalize, unable to test Joe Hart. Each promising attack broke down, or was not converted, as there was a bizarre reluctance to shoot. As the clock ticked past the hour mark, one started to notice growing signs of frustration among certain sections.

Into the last ten minutes, and some fans believed United had squandered their best chance in years to upstage the 'noisy neighbors'. Others, chanted 'attack, attack, attack!' portraying a sense of belief seen during Sir Alex Ferguson's era. An almost-sensational moment came five minutes from time, as Lingard's flick rattled off the crossbar. That was the chance. And United had blown it. The fans though got going once again. In the last minute of the ninety, a diving Joe Hart prevented the roof from blowing off, as he saved Smalling's effort.

As the full-time whistle blew, there were mixed feelings amongst fans. One United fan, seated in the East Stand summed it up by saying, "We did everything but score." He was spot on. United had dominated the game and played City off the park. My journey had been worthwhile, but lacked the 'I was there' moment.

An unforgettable day culminated in a stalemate and saw points being shared but I returned to London, feeling truly a red.

Comments
Topics mentioned in this article
English Premier League Manchester United Manchester City Football
Get the latest updates on India vs South Africa and check out  Schedule, Results and Live Score. Like us on Facebook or follow us on Twitter for more sports updates. You can also download the NDTV Cricket app for Android or iOS.