Manchester City moved four points clear at the top of the Premier League after Gabriel Jesus sealed a 1-0 win against Sheffield United on Saturday. 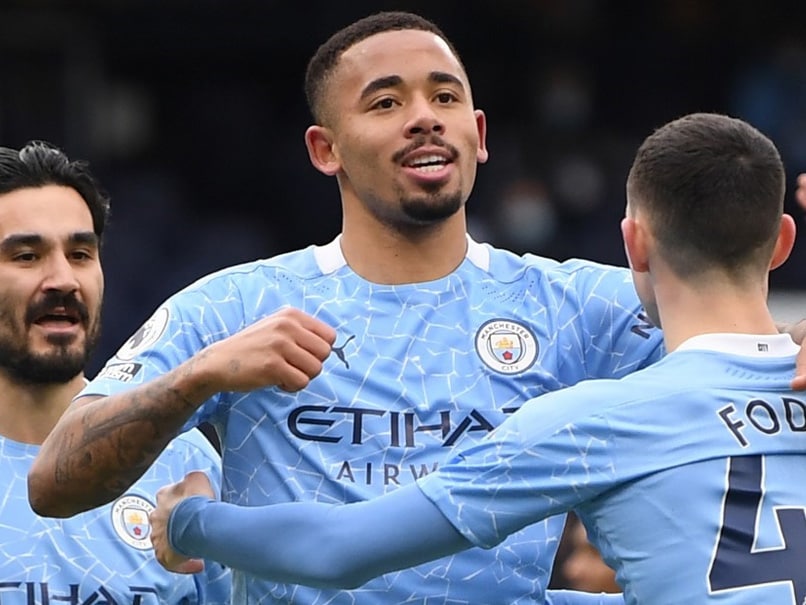 Manchester Citymoved four points clear at the top of the Premier League after Gabriel Jesus sealed a 1-0 win against Sheffield United on Saturday. Pep Guardiola's side took an early lead through Jesus's close-range strike at the Etihad Stadium. City couldn't add to that advantage against the bottom of the table Blades, but their rock-solid defence nailed down the points with a fifth successive league clean sheet. Second-placed Manchester Unitedwould move back within one point of City if they win at Arsenal later on Saturday. Regardless of United's result, City have no reason to fear anyone at present.

Their winning run is now up to 12 matches in all competitions and they are unbeaten in 19 games since losing to Tottenham in November.

At that stage, it was easy to believe City would struggle to feature in the title race.

But, revitalised by Guardiola's tactical tweaks, they are in the hunt for a third English title in four seasons despite the continued absence of star striker Sergio Aguero.

City's winning streak is the ideal preparation for next Sunday's trip to champions Liverpool, which comes after a visit to Burnley on Wednesday.

Guardiola made five changes from Tuesday's win at West Bromwich Albion, with Jesus and Ferran Torres among the players to come in.

That pair played the key roles as City took the lead in the ninth minute.

Torres showed impressive determination to hold off challenges from two United defenders on the right edge of the penalty area as he stumbled to the turf.

Regaining his balance, Torres deftly flicked a pass through to Jesus, who took two touches to get the ball out from under his feet before slotting past Aaron Ramsdale from close range.

The Brazilian striker's sixth goal of the season was his first in the Premier League since early November, ending a nine-game barren run in the competition.

Bernardo Silva should have doubled City's lead when he headed straight at Ramsdale after a mistake from Ethan Ampadu.

For their territorial dominance, City couldn't deliver the knockout blow and Ederson had to be alert to save Rhian Brewster's effort for the Blades.

They kept pushing and Kyle Walker whipped in a cross that deflected off Jayden Bogle, forcing Ramsdale to tip over the bar.

Ruben Dias headed wide from Ilkay Gundogan's corner, while Jesus was denied by Ramsdale's block just before he could pull the trigger.

Chris Wilder's team had enjoyed a shock win at Manchester United in midweek and they nearly equalised against the run of play on the other side of the city when Bogle volleyed over from Oli Burke's cross.

As the tension mounted, John Fleck was inches away from shocking City in the final moments when he volleyed just wide from long range.

Manchester City Sheffield United Gabriel Jesus English Premier League Football
Get the latest updates on T20 World Cup, check out the T20 World Cup Schedule and Live Score . Like us on Facebook or follow us on Twitter for more sports updates. You can also download the NDTV Cricket app for Android or iOS.