Premier League champions Manchester City confirmed on Monday they would appeal against the red card handed out to captain Vincent Kompany in their 2-0 win away to Arsenal on Sunday. 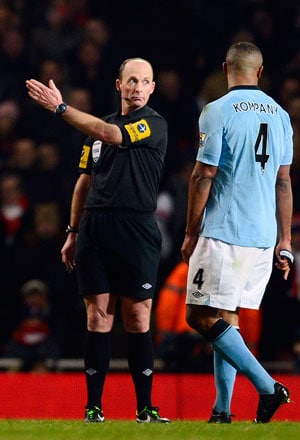 Premier League champions Manchester City confirmed on Monday they would appeal against the red card handed out to captain Vincent Kompany in their 2-0 win away to Arsenal on Sunday.

Kompany was dismissed 15 minutes from time by referee Mike Dean at the Emirates Stadium on the grounds he'd used excessive force in tackling Arsenal midfielder Jack Wilshere, despite getting to the ball first.

A brief statement on City's website on Monday said: "City have appealed the red card Vincent Kompany was shown during Sunday's 2-0 win at Arsenal.

"If upheld, he will miss the next three games.

"Massive congrats to our team and fans, great game! Also. No grudges against the referee, I understand the difficulty of the job," tweeted Kompany after a win that saw City stay seven points behind leaders Manchester United.

"About the tackle: If the ball is overrun by the opponent and a 50/50 challenge occurs, collision is inevitable."

He added: "Ultimately I'm a defender: Appeal may work or not. I will never pull out of a challenge, as much as I will never intend to injure a player.

"It's about the team and our team looks strong at the moment. We need to maintain this level of performance."

However, Kompany risks being banned for a further match if he launches an unsuccessful appeal -- a suspension which would see him miss the Liverpool visit at the start of February.

First-half goals from James Milner and Edin Dzeko secured victory against an Arsenal side who themselves played most of the match a man down after defender Laurent Koscielny saw red for a 10th minute foul on Dzeko.

Comments
Topics mentioned in this article
Football Arsenal Manchester City Mark Hughes Vincent Kompany Alex Ferguson English Premier League
Get the latest updates on ICC T20 Worldcup 2022 and CWG 2022 check out the Schedule, Live Score and Medals Tally. Like us on Facebook or follow us on Twitter for more sports updates. You can also download the NDTV Cricket app for Android or iOS.