Edin Dzeko and David Silva missed gilt-edged late chances at Liberty Stadium for the deposed champions, who are provisionally seven points clear of third-place Chelsea having played a game extra. 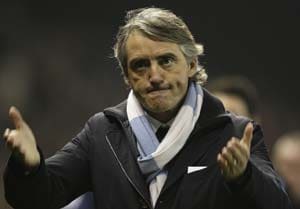 Manchester City dropped points in its bid to secure second place in the English Premier League by drawing 0-0 with Swansea in a lackluster match on Saturday.

Edin Dzeko and David Silva missed gilt-edged late chances at Liberty Stadium for the deposed champions, who are provisionally seven points clear of third-place Chelsea having played a game extra.

"The first half was so-so but we missed five incredible chances to score," City manager Roberto Mancini said. "We had motivation because we want to get second place."

Key City midfielder Yaya Toure was substituted at halftime because of injury but Mancini said the Ivory Coast international "will be OK" for the FA Cup final against Wigan next Saturday.

Swansea, which has won just once since capturing the League Cup in February, started well, with Pablo Hernandez and Michu wasting excellent opportunities, before fading in a second half that often had the intensity of a preseason friendly

"We were playing a great team, but the second half was not the best football for both sides," Swansea manager Michael Laudrup said. "We keep our position of ninth in the table with a game in hand so we are happy with that."

Michu, Swansea's top scorer, hobbled off with a right hamstring injury and Laudrup said: "It is probably goodbye for the season. We need support for him up front for next season and that is what we will try to do in the summer."