Manchester City manager Roberto Mancini is sweating on the fitness of Sergio Aguero after the Argentina striker suffered a nasty knee injury in the champions' dramatic 3-2 win over Southampton. 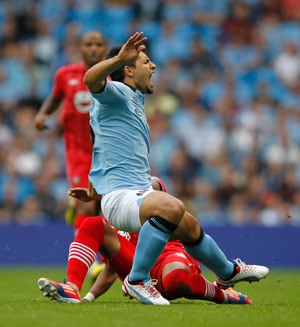 Manchester City manager Roberto Mancini is sweating on the fitness of Sergio Aguero after the Argentina striker suffered a nasty knee injury in the champions' dramatic 3-2 win over Southampton.

City started their Premier League title defence in the same way they won the crown last season as Mancini's men recovered from 2-1 down to win in a frantic encounter at Eastlands.

But the victory, which bore more than a passing resemblance to that epic 3-2 triumph against QPR on the final day of last season, was marred by the injury to Aguero, who twisted his knee following a fair challenge from Southampton defender Nathanial Clyne early in the contest.

Aguero was stretchered off the field and taken to hospital for scans on the injury amid fears of ligament damage, with results expected to take up to 48 hours.

With only 10 days remaining in the transfer window, Mancini admitted that his final activities in the market could well be dictated by the results of those tests.

"We don't know at the moment, we need to wait maybe two days to get the scans," said Mancini. "We hope it's not serious, but at this stage I don't know.

"The knee is always dangerous and the injury was so strange. I am worried, yes, but we don't know yet.

"At the moment, we can say nothing. This can happen in every game, it is clear that you can be lucky through the year, but today it is a problem.

"If it is a serious injury, we will probably change our plans. Maybe he is out for a week, or three or four weeks, or after the international break."

Now the Italian will turn his attention to a list of attacking targets including Swansea's Scott Sinclair, Edinson Cavani at Napoli and Fernando Llorente of Athletic Bilbao.

Mancini confirmed one piece of business that is close to completion is the potential sale of winger Adam Johnson - either in a permanent £10 million move to Sunderland or Spurs or, possibly, on loan to Everton.

City, defending champions for the first time in 44 years, needed late goals from Edin Dzeko and Samir Nasri to see off Southampton.

After Carlos Tevez's first half opener, substitutes Rickie Lambert and Steven Davis had put Saints into a 2-1 lead.

But City's gritty recovery protected an unbeaten home league run that dates back to December 2010.

Mancini paid tribute to Tevez and Nasri but admitted there is more to come from players like Mario Balotelli and David Silva, who had busy summers at Euro 2012 and looked lacklustre in the season opener.

"It's the first time in about 10 years Carlos has done a pre-season, so if you do a pre-season you can start like he did," joked Mancini.

"In this moment, there are some players like Mario and Silva who start their season in July, so it takes time. For this reason they can't be 100 per cent."

Nigel Adkins, the Southampton manager, was understandably buoyed by his team's performance.

"We've come away to the champions and wanted to give ourselves an opportunity to win the game.

"We're a team with back-to-back promotions over the last two years and we knew this season was going to be a challenge.

"But there are 38 games in the Premier League and we have to find ways to win."

Comments
Topics mentioned in this article
Manchester City Alex Ferguson Mark Hughes Samir Nasri Sergio Aguero Football Cricket Inter Milan Mario Balotelli English Premier League
Get the latest updates on India vs Australia and check out  Schedule, Results and Live Score. Like us on Facebook or follow us on Twitter for more sports updates. You can also download the NDTV Cricket app for Android or iOS.