Manchester City were held to a 1-1 draw by Liverpool after Kevin de Bruyne missed a penalty. 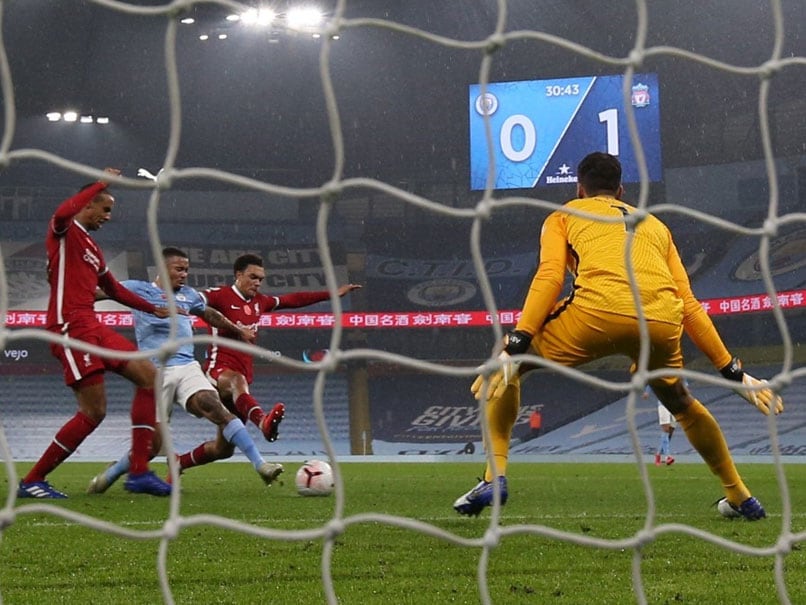 Manchester City were left to rue Kevin De Bruyne's missed penalty as Liverpool escaped from the Etihad Stadium with a point for the first time in four seasons after a 1-1 draw on Sunday. A flying start from the Reds was rewarded with Mohamed Salah's 13th minute penalty, but Gabriel Jesus levelled for Pep Guardiola's men before De Bruyne failed to hit the target from the spot three minutes before half-time. A share of the points between the sides that have combined to win the title for the past three seasons leaves Liverpool in third just a point off the top, while City sit five points further back in 12th but with a game in hand.

City had won 4-0 when the sides last met in Liverpool's first game as English champions for 30 years in July, and the Reds started with an intent to make amends.

Diogo Jota retained his place after a stunning start to his Liverpool career, including a hat-trick in Tuesday's 5-0 Champions League demolition of Atalanta.

However, Jurgen Klopp did not sacrifice Roberto Firmino for the Portugal attacker and instead named a front four also including Salah and Sadio Mane.

Klopp's brave approach paid off in a blistering start from the visitors. Ederson rushed off his line to deny Jota inside the first minute, but the Brazilian was beaten on 13 minutes by Salah from the penalty spot after Kyle Walker upended Mane.

City, though, managed to compose themselves after going behind and pick the holes in the two-man Liverpool midfield that Klopp's attacking approach left exposed.

Raheem Sterling should have squared to Jesus instead of going for goal as Alisson Becker blocked from the England international.

But Jesus's showed why City have missed a natural striker for most of the season with both he and Sergio Aguero sidelined by injury with a stunning finish to level on 31 minutes.

City were now in the ascendancy as De Bruyne drilled a low shot inches wide, but the normally brilliant Belgian let Liverpool off the hook just before half-time.

Joe Gomez was penalised for handling inside the area after a VAR review. But De Bruyne missed his first penalty for four years when he pulled his spot-kick wide of the target.

The English champions nearly made the most of that reprieve straight away as Ederson had to save at his near post to deny Alexander-Arnold restoring Liverpool's advantage.

The second period failed to match the thrilling end-to-end pace of the first.

Jota tested Ederson again early in the half, but it was City who more control and the better openings.

Jesus headed a golden opportunity wide before De Bruyne saw another sighter fail to dip in time from the edge of the box.

Klopp finally withdrew the off-form Firmino for Xherdan Shaqiri, but Liverpool suffered a setback when Alexander-Arnold was forced off with a calf problem.

Yet, already shorn of their talismanic presence at the back in Virgil van Dijk, Liverpool's makeshift defence saw out the final half hour with few problems to claim a vital point.

Liverpool Kevin De Bruyne Mohamed Salah Gabriel Jesus Football
Get the latest updates on Fifa Worldcup 2022 and check out  Fifa World Cup Schedule, Stats and Live Cricket Score. Like us on Facebook or follow us on Twitter for more sports updates. You can also download the NDTV Cricket app for Android or iOS.