Manchester City defender Joleon Lescott has rounded on those who have labelled the club "bottlers" and blamed high-profile teammates Mario Balotelli and Carlos Tevez for hampering their title bid. 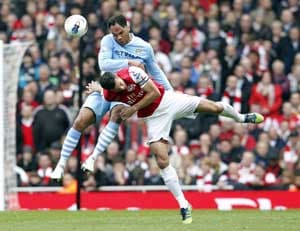 Manchester City defender Joleon Lescott has rounded on those who have labelled the club "bottlers" and blamed high-profile teammates Mario Balotelli and Carlos Tevez for hampering their title bid.

Earlier this season City appeared well on course to end their 44-year-wait to be crowned champions of England once again.

But in the race for the Premier League title they now trail holders and local rivals Manchester United by five points with four games left.

Many pundits have claimed City would have won the title by now had not Tevez, who recently returned to first-team action, spent several months in self-imposed exile after falling out with manager Roberto Mancini following his refusal to warm-up in September's Champions League match against Bayern Munich.

And several of the same observers have argued City's talented but ill-disciplined Italian striker Balotelli has been a destabilising influence at Eastlands and a key reason why Mancini's men have surrendered the league lead they held at the start of March, citing his red card in a recent defeat by Arsenal as proof of his immaturity.

But Lescott told Sky Sports on Wednesday: "I think it's a bit harsh to solely lay the blame on Mario.

"He's a young player and he's going to make mistakes, and we all did at that age. Hopefully he is learning from them and when he plays he is going to give 100 percent.

"Obviously he's disappointed what happened with Arsenal but I am sure he's learnt from that."

Since losing to Arsenal, City have beaten West Brom and Norwich in convincing fashion, with Tevez scoring four goals.

Lescott added: "We're not dwelling on the past. Who's to say that if Carlos had stayed he wouldn't have got injured and been out for the rest of the season?

"We're just grateful now that he's back and playing for Man City and scoring goals."

United host Everton on Sunday while City travel to Wolves, with the two Manchester clubs then meeting in a derby at Eastlands on April 30.

As for suggestions, City might be 'bottlers', Lescott said: "Our mental state is fine. We had a bit of a run of consistency in the last few weeks but in the last two games we have shown that we are a good team and our strength in depth is there. We have proven we are a good squad.

"No disrespect to Everton and Wolves but we'd both like to think that we could win those games. So that means there is more emphasis on the derby.

"No matter what we're going to have to win that if we want to win the league and take control of our own destiny."