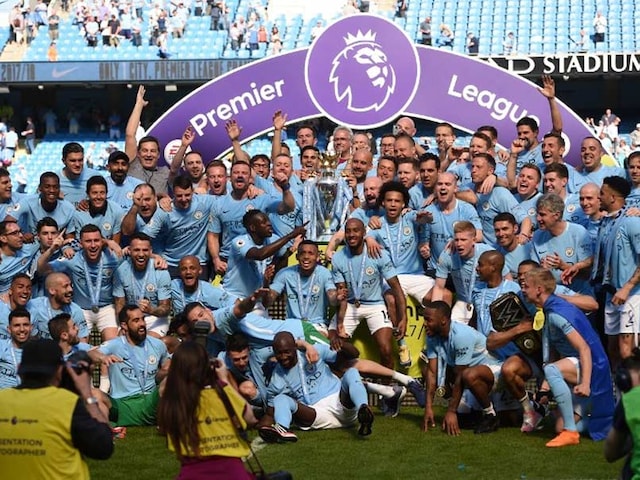 It took three weeks for Manchester City captain Vincent Kompany to finally get his hands on the Premier League trophy but, on a day of celebrations at the Etihad, a goalless draw may have left Huddersfield Town as the big winners. A strong showing from the struggling visitors earned a valuable point which may be enough to keep them in the Premier League for a second season, an impressive achievement given their limited resources. They also frustrated the bid by Pep Guardiola's runaway champions to set new Premier League records for the most goals, points and wins in a season -- all marks which could yet be claimed by City in the season's final week in which they play Brighton and Southampton.

But, after a delay while uninvited supporters were removed from the field, Guardiola was finally able to see his team presented with the trophy which marks the third major country in which he has managed a team to a title following successes in Spain and Germany with Barcelona and Bayern Munich.

"England is a special place and is so tough," Guardiola told Sky Sports. "Today we saw it. You never know if you are going to win, but I had no doubt what I had to do.

"You win or lose, you have to try and do what you believe. Today was proof we can do better.

"We lost a bit of focus, but that is normal. To make back-to-back titles in this league will be tough, but we accept the challenge."

The celebrations for City's third title in seven seasons began well before kick-off, both inside and outside their Etihad home ground.

Supporters were issued with blue and white flags to greet the champions as they were given yet another guard of honour on their way onto the field before kick-off.

They were also met by the survivors of City's famous 1968 title-winning side, a squad led by club legends Colin Bell, Francis Lee and Mike Summerbee who were all on hand to receive an emotional welcome from fans who remember their feats half a century on.

These title celebrations have been curiously drawn out.

This time there was none of the edge-of-the-seat drama that so famously brought City their first Premier League title, when Sergio Aguero scored with virtually the last kick of the season against QPR in 2012.

Since then City have enjoyed comfortable wins over Swansea and West Ham, but on Sunday there was no hint of Huddersfield showing the champions too much respect when the contest finally kicked off.

Victory would have guaranteed Huddersfield safety and another season of top flight football.

David Wagner's men might have been on course for just such an upset result in an entertaining, if goalless, first half but Ederson denied Florent Hadergjonaj and Alex Pritchard.

A City side that had been held goalless in just one previous league game -- a draw at Crystal Palace on New Year's Eve -- inevitably carved out chances of their own with Jonas Lossl saving well at David Silva's feet after five minutes and, unknowingly, stopping a fierce Kevin De Bruyne shot.

By the interval, Huddersfield were visibly wilting in the Manchester heat and facing the prospect of a long second half of attrition.

City started brightly, with Christopher Schindler clearing off his line from a scramble at a Leroy Sane corner, but otherwise Huddersfield defended manfully and substitute Scott Malone might even have snatched a dramatic injury-time winner for the visitors.

But Guardiola's heartfelt congratulations to his opposite number Wagner on the final whistle, demonstrated the importance of the point to the visitors who now join Everton and Manchester United as the only sides to have avoided defeat at the Etihad in the league this season.

Comments
Topics mentioned in this article
Manchester City English Premier League Football
Get the latest Cricket news, check out the India cricket schedule, Cricket live score . Like us on Facebook or follow us on Twitter for more sports updates. You can also download the NDTV Cricket app for Android or iOS.