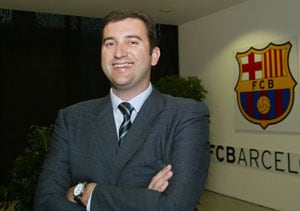 Soriano's arrival fills the vacancy left by the controversial departure of Garry Cook last season and the ex-president of Spainair will take up his position on September 1.

The 44-year-old, who worked for Barca from 2003 to 2008, is credited with transforming the Spanish club's off-field operations during his time at the Camp Nou.

He was Barca's vice-president and head of economics and worked as general manager.

In his first three years he helped increase revenues and the club moved into a profit-making position.

He was also closely involved in transfers before resigning from the board along with president Joan Laporta in 2008.

"I am delighted to take up the position of chief executive officer of Manchester City Football Club," Soriano told City's website.

"The vision of the owner together with his commitment, and that of the chairman and board, make this opportunity absolutely compelling.

"The club has incredible potential to be fulfilled both on and off the field.

"I very much look forward to playing my part to ensure that happens."

"In Ferran we have our preferred candidate. His experience in football and in the wider commercial world make him exceptionally well equipped to lead Manchester City through its continued evolution."

Cook quit City last year after admitting an error of judgement when a vile email was sent to the cancer-stricken mother of the club's defender Nedum Onuoha, who has since joined QPR.

The email from Cook's account, which contained critical comments about Onouha's mother, who worked as Nedum's agent, had been intended for City's chief football operations officer Brian Marwood.

Comments
Topics mentioned in this article
Football Inter Milan Levski Sofia Samuel Eto'o Barcelona AC Milan Manchester City Alex Ferguson Mark Hughes English Premier League
Get the latest updates on ICC T20 Worldcup 2022 and CWG 2022 check out the Schedule, Live Score and Medals Tally. Like us on Facebook or follow us on Twitter for more sports updates. You can also download the NDTV Cricket app for Android or iOS.