Manchester City proved there is no hangover from the Carlos Tevez controversy as a 4-1 victory over Aston Villa at Eastlands lifted them to the top of the Premier League on Saturday. 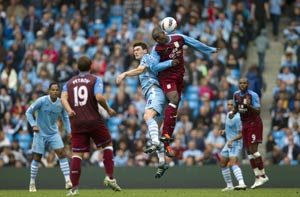 Manchester City proved there is no hangover from the Carlos Tevez controversy as a 4-1 victory over Aston Villa at Eastlands lifted them to the top of the Premier League on Saturday.

City have been dogged by the fall-out from the Tevez controversy in recent weeks, but goals from Mario Balotelli, Adam Johnson, Vincent Kompany and James Milner showed life goes on without the suspended Argentine.

Stephen Warnock scored a consolation for Villa, beaten for the first time in the Premier League this season by a City team who still have the shadow of Tevez's future hanging over them following his refusal to play in the recent Champions League game at Bayern Munich.

The issue clearly is having no impact on City's football as they moved above Manchester United into first place in the table ahead of next weekend's eagerly-awaited derby between the sides at Old Trafford.

City started slowly after Roberto Mancini's decision to leave three of his most effective attacking players -- David Silva, Samir Nasri and Edin Dzeko -- on the bench and Villa might have drawn first blood after only 11 minutes.

Gabriel Agbonlahor robbed Joleon Lescott wide on the Villa left and powered clear on goal but failed in his bid to lift the ball over goalkeeper Joe Hart who made a fine block before Kompany cleared a follow-up attempt from Warnock.

The narrow escape finally breathed life into the home side and they soon launched their first meaningful attack of the game when Yaya Toure advanced down the right and pulled the ball back intelligently for Balotelli.

The young Italian, playing as a lone striker, steered an accurate shot goalwards which was intercepted by Milner, via a back heel which passed just wide of the mark.

Finally, City were gathering a head of steam and Micah Richards won a 28th minute corner with a run down the right which allowed Johnson to swing over a dangerous kick which Darren Bent could only flick on.

Richards controlled the ball with his chest and it sat up invitingly for Balotelli to produce an overhead kick into the back of the net from six yards.

Villa appeared in danger of being swamped, as their former favourite Milner surged into the area only to mis-hit his shot under pressure from Warnock.

The second half opened with Emile Heskey spurning a chance to connect with an Agbonlahor cross and that squandered opportunity would soon prove costly as City effectively wrapped up victory within seconds.

Yaya Toure's ball over the top of Villa's back line found Warnock back-pedalling and failing in an attempt to volley clear, presenting Johnson with the chance to steady himself before calmly beating Given from just inside the area.

The second goal clearly demoralised the visitors and, after 51 minutes, Balotelli's curling shot was pushed away by Given only for City to retain possession and win a corner when Gareth Barry's shot was deflected behind via Richard Dunne.

Johnson yet again produced the perfect set-piece delivery, one met equally impressively by Kompany who steered his header into the Villa goal.

Warnock claimed a Villa consolation on 64 minutes, lashing the ball into the roof of the City goal after Agbonlahor's cross from the right had been helped on by Darren Bent but the relief was to be shortlived for the visitors.

After 70 minutes, Milner started the move that led to goal number four with a deep pass towards the right-hand corner flag which was collected by Johnson.

His pass to Barry was moved square for Milner to place a superb shot into the top left-hand corner of the Villa net.