Hart had been dropped by Pellegrini after a series of error-prone performances hit a new low with an embarrassing blunder which sent City crashing to a last-minute defeat at Chelsea in October. 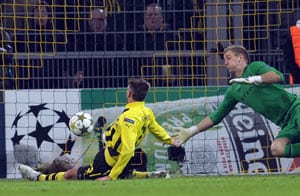 Manchester City manager Manuel Pellegrini refused to confirm if Joe Hart had done enough to retain his place after the goalkeeper's spell in exile ended in a 4-2 win over Viktoria Plzen.

Hart had been dropped by Pellegrini after a series of error-prone performances hit a new low with an embarrassing blunder which sent City crashing to a last-minute defeat at Chelsea in October.

The 26-year-old languished on the bench for the next five matches as Costel Pantilimon performed well in his place, with only a solitary appearance for England against Germany to sustain him.

Hart was finally allowed to pull on the City shirt again in Wednesday's Champions League clash at Eastlands and he made a good case for his permanent return with two important saves as the hosts survived a sloppy defensive display to see off the Czech minnows.

Hart couldn't be faulted for either of Plzen's goals and his save to deny Frantisek Rajtoral in the closing moments preserved City's win.

He also nearly provided a remarkable assist for Sergio Aguero with a huge clearance to the Argentine, who fired home only to see his goal ruled out for a foul.

With Swansea due at Eastlands in the Premier League on Sunday, Hart will hope he has done enough to retain his place, but Pellegrini was coy when asked who would start this weekend.

"I think Joe played very well. I didn't expect he would have to work so much during the game," Pellegrini said.

"Plzen had more chances to score than teams who have played us in the Premier League.

"From tomorrow (Thursday) we will start thinking about the next game. Now we are talking about the Champions League. But I repeat I think Joe did a very good performance.

"Tomorrow I will start thinking about who is the best 11 for the next game, that includes the goalkeeper and everyone else."

"I think we could have scored more, but in the second half unfortunately Joe Hart was very good and saved our chances."

Hart's sterling efforts were the main bright spot from a disjointed City display that saw them exposed at the back by the unheralded Czechs.

Aguero had put City ahead with a first-half penalty, but Tomas Horava equalised before half-time.

Samir Nasri restored the hosts' advantage, only for Plzen to hit back again through Stanislav Tecl.

Substitute Alvaro Negredo finally tipped the balance in City's favour with 12 minutes left and Edin Dzeko sealed the points in the final moments.

City's victory means they remain three points behind group leaders Bayern Munich and could finish top if they beat the holders at least 3-0 in the Allianz Arena on December 10.

Pellegrini made seven changes to the team that routed Tottenham 6-0 on Sunday, but he was still angry with City's careless defending and lack of application in midfield.

"We can attack and score without giving so many chances in the defence as we did today," he said.

"One of the most important things as an attacking team is to know how to defend and today we did very badly."

At least Pellegrini could have no complaints about his forwards.

City have now scored 22 goals in their last four home games in all competitions and they were too sharp in thought and deed for Plzen to handle.

The key to City's attack is Argentine forward Aguero, who now has 16 goals this season, and Pellegrini was quick to dismiss fears that his half-time substitution was due to an injury.

"Aguero doesn't have any problem, he knew from the beginning he was only going to play 45 minutes," Pellegrini added.