Mourinho claimed that Suarez attempted 'an acrobatic swimming pool jump to try to get a penalty' during Chelsea's 2-1 victory over Liverpool. 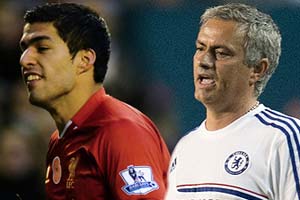 Chelsea manager Jose Mourinho believes that Luis Suarez remains at the mercy of his "wild nature" despite the Liverpool striker's improved conduct in the Premier League season to date.

Suarez was banned for 10 games after biting Chelsea defender Branislav Ivanovic in a game last April, but he has since found the form of his Liverpool career to spearhead his side's title challenge.

However, the Uruguayan was involved in a contentious incident towards the end of Liverpool's 2-1 defeat at Chelsea on Sunday, when he went down under a challenge from Samuel Eto'o after losing the ball to Cesar Azpilicueta.

Referee Howard Webb ignored his appeal for a penalty, enabling Chelsea to complete a victory that took them to within two points of league leaders Arsenal and left Liverpool six points off the pace in fifth.

"Suarez lost the duel with Azpilicueta, Azpilicueta has the ball, Azpilicueta is leaving the box with the ball, and now he (Suarez) is doing an acrobatic swimming pool jump to try to get a penalty," said Mourinho.

"Because he's so clever that he also knows that he's in the area where he has the Liverpool supporters behind (him).

"But Webb is only 10 metres away and I think the only mistake Webb did was not to give him a yellow card."

Mourinho added: "He (Suarez) is a very nice boy, he does everything to win and Brendan (Rodgers) is doing a fantastic job on him, because he's changed.

"Culturally, people from that area (Uruguay), they like it. But it's not only that area -- there is a corner in Europe where I belong to (Portugal) that they also like it."

Liverpool manager Rodgers would not be drawn into a battle of words with Mourinho, with whom he worked as a youth coach during the Portuguese's first stint at Chelsea between 2004 and 2007.

However, he felt that Eto'o should have been sent off for a knee-high early foul on Jordan Henderson, which yielded a free-kick from which Martin Skrtel put Liverpool ahead.

"Let's talk about the first Eto'o incident, when he should have been sent off," Rodgers said.

"I know we scored from it but that was a wild challenge where he's come right down his knee and down his shin, and didn't even get a yellow card."

Man-of-the-match Eden Hazard curled home a fine goal to equalise in the 17th minute, before Eto'o got a toe to a low cross from Oscar that Simon Mignolet could only help into the net 11 minutes before half-time.

It was a second successive defeat for Liverpool, after their 2-1 loss at Manchester City on Thursday, but Rodgers feels that his side have demonstrated that they are genuine title contenders.

Already without Steven Gerrard, Daniel Sturridge and Jose Enrique due to injury, Rodgers saw Mamadou Sakho and Joe Allen hobble off at Stamford Bridge, and he said that he would look to bolster his squad in the January transfer window.

"We've shown over the first 19 games this season that if we get the players back and we get some help in January with a few more players, we can be in the shake-up," he said.

"That was the biggest thing because Liverpool was never in the conversation for the last couple of years."

The game was also a costly one for Mourinho, who had lost both Ivanovic and Frank Lampard to injury by the beginning of the second half.

Mourinho was unable to give an estimate as to how long his players might be sidelined, but Rodgers revealed that Sakho had suffered a hamstring injury likely to keep him out for "a bit of time".

Comments
Topics mentioned in this article
Bayern Munchen Manchester City Liverpool Football Mark Hughes Alex Ferguson John Terry English Premier League
Get the latest updates on IPL 2020, check out the IPL Schedule for 2020 and Indian Premier League (IPL) Cricket live score . Like us on Facebook or follow us on Twitter for more sports updates. You can also download the NDTV Cricket app for Android or iOS.