West Bromwich got back to winning ways with a battling 2-1 win over struggling Bolton at The Hawthorns on Saturday. 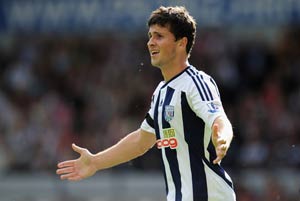 West Bromwich got back to winning ways with a battling 2-1 win over struggling Bolton at The Hawthorns on Saturday.

Goals from the outstanding Jerome Thomas after 16 minutes and fit-again Irish striker Shane Long after 56 were enough to ensure all three points stayed in the Midlands with goal-shy Bolton only managing a Ivan Klasnic penalty after 21 minutes.

The win hoists The Baggies up into mid-table respectability while Bolton remain firmly stuck in the relegation zone.

Roy Hodgson's side kicked off in 14th place with 11 points from 11 games, just two points clear of Owen Coyle's struggling Lancashire outfit who were stuck in the bottom three despite winning 5-0 over Stoke City last time out.

West Brom were boosted by the return from a knee injury of top scorer Long and it was the Baggies who struck first after 16 minutes when Thomas beat the offside trap on a pass from Zoltan Gera to round Jussi Jaaskelainen and fire home.

Just five minutes later though Thomas turned sinner when he clumsily upended Fabrice Muamba in the box and Klasnic blasted home from the penalty spot to level for The Trotters.

West Brom had by far the best of the pressure as the second half got underway with Gera and Thomas to the fore again but it was an inch-perfect cross from Nicky Shorey after 55 minutes that set up Long to head home his fourth goal of the season.

Bolton brought on Martin Petrov for Chris Eagles and David Ngog for Kevin Davies as they pushed forward in search of the equaliser, but it was West Brom who came close to going 3-1 up with a Gera snapshot rising over the crossbar.

It was all West Brom in the closing stages with England defender Gary Cahill outstanding in a hard-pressed Bolton defence.

Graham Dorrans came on for Thomas after 80 minutes as the home side looked to hold on to their lead, which they managed to do comfortably enough.