Andy Carroll made an immediate impact at West Ham as the Liverpool reject inspired his new club to a 3-0 win over Fulham at Upton Park on Saturday, but the England striker's debut was marred by a hamstring injury. 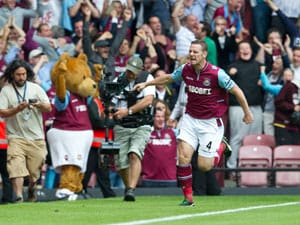 Andy Carroll made an immediate impact at West Ham as the Liverpool reject inspired his new club to a 3-0 win over Fulham at Upton Park on Saturday, but the England striker's debut was marred by a hamstring injury.

Carroll was making his first West Ham appearance after being shoved out on loan for the season by Liverpool boss Brendan Rodgers, who doesn't believe the burly targetman is a good fit for his smooth passing style.

The 23-year-old took less than 60 seconds to show why his aerial power makes him such a threat with a crucial flick in the build-up to Kevin Nolan's opener and, after Winston Reid increased West Ham's lead, he caused panic in the Fulham defence before Matt Taylor's goal.

Carroll's premature exit from Anfield, just 18 months after Liverpool paid a club record £35 million to sign him from Newcastle, doesn't seem to have damaged his morale judging by this influential display and Hammers boss Sam Allardyce will hope the tight hamstring that forced his new signing off after 68 minutes isn't serious.

England boss Roy Hodgson will also be concerned about Carroll's fitness ahead of the forthcoming World Cup qualifiers against Moldova and Ukraine.

While Allardyce had thrown his new signing straight into the starting line-up, Fulham manager Martin Jol waited until half-time to bring on his high-profile new recruit and by then it was too late for Bulgarian striker Dimitar Berbatov, signed from Manchester United on Friday, to have any significant impact on the result.

It was a dream debut for Carroll, who showcased his strength in the air in the first minute as he rose to direct a header towards Ricardo Vaz Te. When Vaz Te moved the ball onto Nolan, the midfielder's strike gave Fulham goalkeeper Mark Schwarzer no chance.

Fulham, who included debutant Kieran Richardson on the left of midfield after his move from Sunderland, never recovered from that setback and New Zealand defender Reid doubled West Ham's lead with a powerful header from Taylor's corner in the 29th minute.

Carroll made his presence felt again four minutes before half-time when three Fulham defenders were drawn towards the striker at a set-piece. Carroll didn't make contact with the ball, but Fulham couldn't clear either and Taylor took advantage as he drilled his shot past Schwarzer.