Liverpool's Luis Suarez ready for a fresh start at Anfield

Liverpool's Uruguayan striker Luis Suarez says he has drawn a line under last season's controversies and is targeting a fresh start this term. 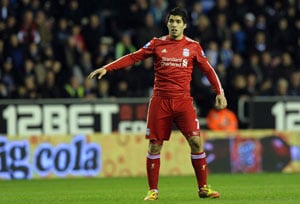 Liverpool's Uruguayan striker Luis Suarez says he has drawn a line under last season's controversies and is targeting a fresh start this term.

Suarez was in hot water following his racial abuse case with Manchester United defender Patrice Evra which saw the 25-year-old slapped with an eight-match ban.

But having signed a new long-term contract with Liverpool Suarez now wants to focus on his football under new manager Brendan Rodgers.

"We are professional footballers," Suarez said in an interview with British media.

"We play football on the pitch.

"Like any other problem someone has, you put it behind you and move on.

"Carlos (Tevez) had some problems as well. But he is a mature person and has sorted out those problems. He is an excellent player and everyone in England is enjoying watching him play at this moment.

"There were clubs who wanted to sign me but my priority was always to stay and sign for Liverpool. I am very happy here and the manager said he wanted me to stay because he was happy with me as a player.

"That gave me confidence. The club have trust in me because of the work I do on the football pitch and what happened in the past is in the past. It is over."

Suarez also revealed Manchester City striker Tevez is the reason he chose to leave Dutch side Ajax and move to the Barclays Premier League.

"I watched Tevez when I was playing in Holland and I could see he was doing really well," said Suarez.

"That was one of the things that really motivated me to come and play in the Premier League.