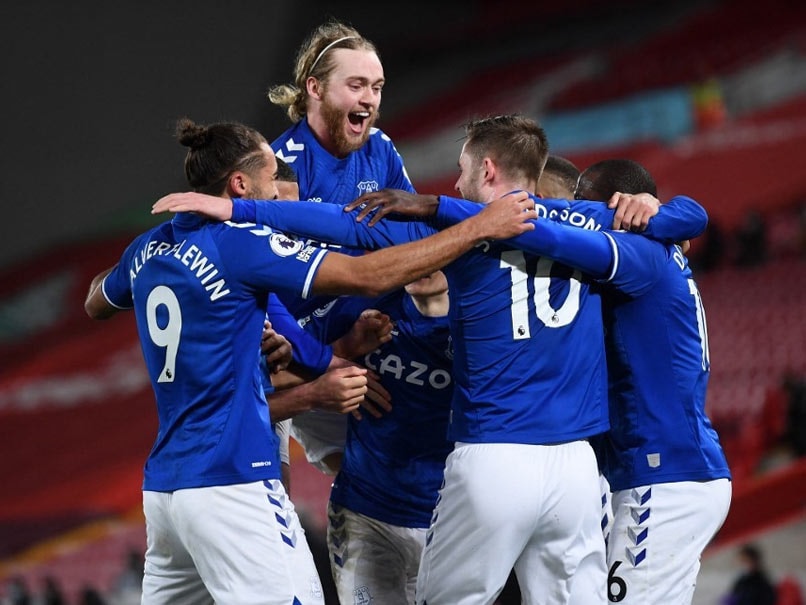 Everton earned their first win at Liverpool since 1999 as the troubled Premier League champions crashed to a 2-0 defeat in the Merseyside derby, while Chelsea's revival under Thomas Tuchel stalled in a 1-1 draw against Southampton on Saturday. Richarlison's early opener and Gylfi Sigurdsson's late penalty gave the Toffees a first win on any ground over Liverpool in 24 attempts dating back to 2010. After a run of 68 league games unbeaten at Anfield, injury-ravaged Liverpool have lost their last four on home turf for the first time since 1923.

"I'm very pleased for the club and the supporters. I hope for sure that they are going to celebrate tonight," said Everton boss Carlo Ancelotti.

Liverpool have won just two of their last 11 league games to leave them in grave danger of missing out on Champions League football for the first time since Jurgen Klopp's first season in charge five years ago.

The Reds are languishing in sixth place and would be five points adrift of the top four if West Ham beat Tottenham on Sunday.

"The first goal which we have to defend better gave the direction of the game. It was unnecessary," said Klopp. "We had to chase the game and were not calm enough."

The sting from defeat in the 238th Merseyside derby will linger even longer given it was a bad tackle from Everton keeper Jordan Pickford in their meeting earlier this season that left Virgil van Dijk sidelined ever since with a serious knee injury.

Without the influential Dutch centre-back, Liverpool have endured a wretched time and their defensive flaws were exposed by Everton after just 145 seconds.

A weak headed Ozan Kabak clearance fell to James Rodriguez, who slipped in a pass behind the on-loan Schalke centre-back and Richarlison ran on to fire an angled drive past Alisson Becker.

Liverpool then suffered the latest in a series of injury blows when captain Jordan Henderson limped off with a groin problem.

The hosts applied all the pressure in the second half but they were hit with a sucker punch seven minutes from time when Dominic Calvert-Lewin was brought down by Trent Alexander-Arnold.

Sigurdsson stroked home the penalty to take Everton level on points with their local rivals and with a game in hand to come.

Chelsea remain in fourth for now as Tuchel is unbeaten in seven games since replacing the sacked Frank Lampard last month.

But the German endured some of the same frustrations that Lampard suffered earlier in the season as the Blues' domination of the ball created little, while one slack moment defensively cost them two points.

On-loan Liverpool midfielder Takumi Minamino did his parent club a favour by opening the scoring with a cool finish after sitting down Edouard Mendy and Cesar Azpilicueta on 33 minutes.

Tuchel sent on Callum Hudson-Odoi for the second half but was less than impressed with the England international as he was replaced just 21 minutes later by Hakim Ziyech.

By that point the visitors were level as Mason Mount converted from the penalty spot after he had been chopped down by Danny Ings.

"We brought in Callum Hudson-Odoi but I was not happy with his attitude, energy and counter-pressing. I took him off and we demand 100 percent," Tuchel said.

"I feel he is not in the right shape to help us. I was not happy with his body language."

After losing six consecutive league matches for the first time in their history, even a scrappy point was a welcome boost for Southampton.

At the bottom, Fulham closed to within three points of survival thanks to Ademola Lookman's strike to beat bottom-of-the-table Sheffield United 1-0.

West Brom's chances of beating the drop are diminishing after a 0-0 draw at Burnley left them still 11 points from safety.

Despite Semi Ajayi's 30th-minute red card for deliberate handball, the Baggies had the better chances at Turf Moor but have won just once in 13 games under Sam Allardyce.

Everton Gylfi Sigurdsson Football
Get the latest updates on ICC T20 Worldcup 2022, check out the Schedule and Live Score. Like us on Facebook or follow us on Twitter for more sports updates. You can also download the NDTV Cricket app for Android or iOS.