Liverpool return to action for the first time in three months against local rivals Everton on Sunday. 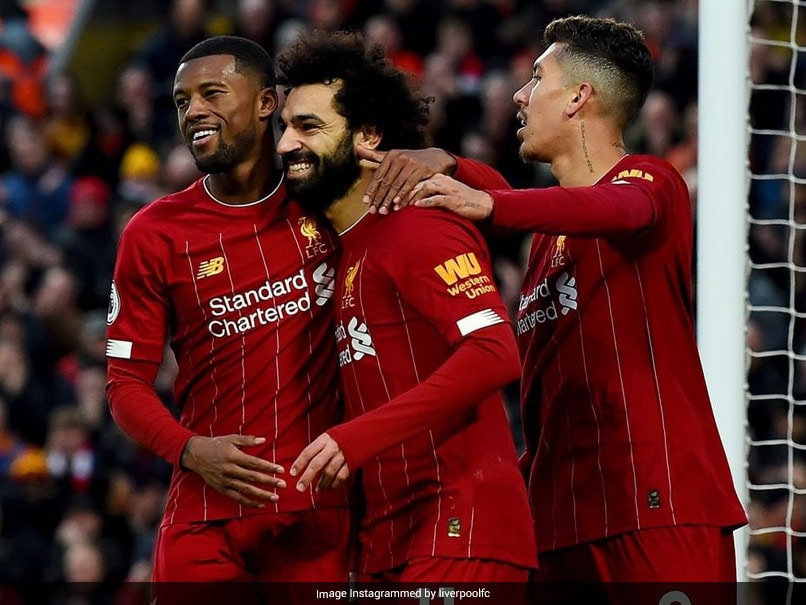 Liverpool can close to within one win of a first league title in 30 years.© AFP

Liverpool can close to within one win of a first league title in 30 years when the English champions-elect return to action for the first time in three months against local rivals Everton on Sunday. Jurgen Klopp's men set a record-breaking pace in the opening eight months of the Premier League season, dropping just five points in 29 games to open up a 22-point lead at the top of the table. A maximum of two wins are now needed from the last nine games to end the long-wait, but Liverpool could be champions as soon as Monday if they beat Everton and Manchester City lose to Burnley 24 hours later.

Despite concerns over supporters congregating around the stadiums, Sunday's clash will take place at Everton's Goodison Park (kick off 1800GMT), less than a mile from Liverpool's Anfield home.

A Merseyside derby like no other will take place behind closed doors, but Klopp is just relieved to have the chance to complete the job on the field after some suggested the season be declared null and void due to the coronavirus pandemic.

"I became worried in the moment when people started talking about null and void the season because I was like 'wow'," said Jurgen Klopp in his pre-match videoconference. "That would have been really, really, really hard."

The German urged his players to embrace the circumstances rather than make excuses.

"When we all started playing football it was without a crowd. If I play today from time to time, it's without a crowd, I still want to win. That's exactly how it is," he added. "It's all different but we cannot change that.

"We have to use the circumstances, not suffer from that. That means there's a game between Everton and Liverpool, which is still a derby and important for both teams for different reasons. That's what we are looking forward to."

Derbies have provided little reason for Everton to remember fondly of late.

The Blue half of Liverpool have not celebrated a victory over the Reds in 10 years and 21 matches.

Twice at Anfield this season, even an under-strength Liverpool have proved too strong for their local rivals.

However, Everton boss Carlo Ancelotti wants his side to embrace the "opportunity" to cause an upset in front of a huge global audience in the first weekend of Premier League action since March.

"It will be difficult but we have to consider it as a great opportunity to show our quality and come back to the Premier League with a good performance," said the Italian.

"I am pleased the game is at Goodison Park, but no one is pleased to play games without supporters."

Ancelotti still has lofty ambitions of Everton challenging for a European place despite his side starting the day in 12th.

Victory at Goodison will mean Liverpool's three-decade wait can come to an end on Wednesday when they host Crystal Palace at Anfield, no matter how City fare against Burnley.

Chelsea also return to action for the first time in three months on Sunday as they look to cement their place in the top four at Aston Villa.

Frank Lampard's men hold a two-point lead over Manchester United and Wolves in fourth, but that advantage could be reduced to one point by kick-off at Villa Park if Sheffield United beat Newcastle to move into fifth.

Chelsea Jurgen Klopp English Premier League Football
Get the latest updates on ICC T20 Worldcup 2022, check out the Schedule and Live Score. Like us on Facebook or follow us on Twitter for more sports updates. You can also download the NDTV Cricket app for Android or iOS.