Liverpool crashed to a miserable 3-0 defeat at West Brom in Brendan Rodgers' first Premier League match as Reds boss, while Arsenal started life without Robin van Persie with a dour 0-0 draw against Sunderland on Saturday. 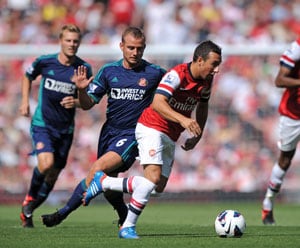 Liverpool crashed to a shock 3-0 defeat at West Brom in Brendan Rodgers' first Premier League match as Reds boss, while Arsenal started life without Robin van Persie with a dour 0-0 draw against Sunderland on Saturday.

Rodgers took over from Kenny Dalglish after Liverpool finished eighth last season, their worst final position for 18 years, and on the evidence of a shocking result at the Hawthorns the former Swansea manager still has plenty of work to do.

Rodgers, who gave debuts to new signings Joe Allen and Fabio Borini and left unsettled striker Andy Carroll on the bench, might have feared the worst when he saw Zoltan Gera blast Albion into the lead with a stunning 43rd-minute strike.

It was a sweet moment for Albion manager Steve Clarke, who was sacked by Liverpool at the end of last season after spending 18 months at Anfield as Dalglish's assistant.

Pepe Reina kept Liverpool in the match when he saved Shane Long's woeful second half penalty after Reds defender Daniel Agger was sent off for a professional foul.

But Albion won another penalty in the 64th minute and this time Nigerian striker Peter Odemwingie stepped up to blast home.

And Romelu Lukaku, on loan from Chelsea, rubbed salt into Liverpool's wounds when he marked his West Brom debut with a 77th-minute strike.

"Some decisions went against us. The sending off and penalties were very, very harsh I felt," Rodgers said.

"We will have more days like this along the way, that is the reality, but I could not ask any more from the players."

But the new boys were underwhelming, with Giroud missing the best chance of the afternoon.

"Playing three strikers didn't work. We had no space, and the passing was not quick enough so it was difficult for them," Wenger said.

"But it's one game and it's too early to draw definitive conclusions."

Jermain Defoe equalised with a close-range effort in the 76th minute, but Hatem Ben Arfa was hauled down by Aaron Lennon four minutes later and the French midfielder picked himself up to score the spot-kick.

The Hammers, promoted via the Championship play-offs, took the points when Kevin Nolan sidefooted home in the 40th minute.

Michu, signed by Laudrup from Rayo Vallecano for £2 million, took just eight minutes to score and the Spaniard struck again in the 53rd minute.

Nathan Dyer netted in the 63rd and 71st minutes and Scott Sinclair scored in the 81st minute.

Championship winners Reading rescued a 1-1 draw against Stoke at the Madejski Stadium on their return to the Premier League after a four-year absence.

Debutant Michael Kightly put Stoke ahead in the 34th minute thanks to a howler from Reading's Australian goalkeeper Adam Federici.

But Adam Le Fondre earned a point with a penalty in the 90th minute after Stoke midfielder Dean Whitehead was sent off.

At Craven Cottage, Fulham striker Mladen Petric showed there is life without Clint Dempsey as his debut double clinched a 5-0 win over Norwich.

With American forward Clint Dempsey reportedly on strike after his fall-out with the club over his desire to join Liverpool, Damien Duff set the ball rolling with the first goal in the 26th minute.

Petric, signed from Hamburg, increased the Cottagers' lead four minutes before half-time and he netted again with a deflected 54th minute strike.