Liverpool forward Craig Bellamy has completed an emotional return to his hometown club Cardiff after signing a two-year contract with the Championship outfit on Friday. 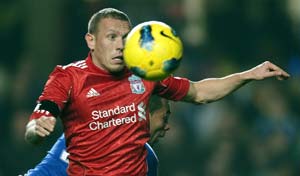 Liverpool forward Craig Bellamy has completed an emotional return to his hometown club Cardiff after signing a two-year contract with the Championship outfit on Friday.

Bellamy spent the 2010-11 season on loan at Cardiff and scored 11 goals in 36 appearances to help the Bluebirds reach the Championship play-off semi-finals.

The 33-year-old former Manchester City and Newcastle star has been keen to rejoin Cardiff on a permanent basis to be closer to his family and he has finally got his wish.

Cardiff chief executive Alan Whiteley praised Bellamy, who was only a fringe figure at Liverpool last season, for buying into the long-term plans of the welsh club's Malaysian owners.

"Their support, commitment and confidence in the vision and ambition of the club has enabled us to attract and retain a squad containing the calibre of players we now have," Whiteley told Cardiff's website.

"This, quite clearly, is demonstrated by Craig's confidence in joining us at this time.

"Craig has had the confidence and courage to buy into our plans and wants to be a part of the club's future.

"I am sure Liverpool will agree their loss is this club's gain and Craig's return will be met with huge excitement and enthusiasm by all Cardiff City fans."

Comments
Topics mentioned in this article
Football Liverpool Manchester City Alex Ferguson Mark Hughes Craig Bellamy English Premier League
Get the latest updates on ICC T20 Worldcup 2022 and CWG 2022 check out the Schedule, Live Score and Medals Tally. Like us on Facebook or follow us on Twitter for more sports updates. You can also download the NDTV Cricket app for Android or iOS.