Liverpool on Monday looked set to stay at Anfield instead of moving to a new ground, after city authorities announced plans to regenerate the area around their historic Anfield home. 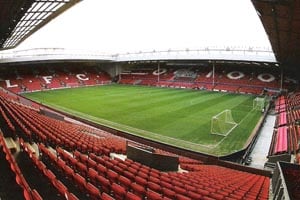 Liverpool on Monday looked set to stay at Anfield instead of moving to a new ground, after city authorities announced plans to regenerate the area around their historic Anfield home.

Liverpool City Council said they had secured a 25-million-pound ($40 million, 31-million-euro) grant to transform the Anfield area in the city in northwest England, with further investment likely from a public housing association.

The club's managing director Ian Ayre described the move as a "major step forward" for both Liverpool and local residents, after years of wrangling about whether they should move from the stadium that has been their home since 1892.

"This is step one as there is land to acquire, plans to be approved, etc. but this is a significant moment. Questions about capacity and cost are not for today, not until we have certainty," he told a news conference in the city.

Redevelopment of Anfield is likely to see improvements and extensions made to the main stand and the Anfield Road end, as the regeneration plans include proposals to clear a number of streets near the ground in agreement with local residents.

Planning permission, though, is still required, which means that a move to a new home in nearby Stanley Park still can not be entirely ruled out.

English Premier League side Liverpool are owned by US firm the Fenway Sports Group, which has previously re-developed existing old stadiums, including the home of the Boston Red Sox baseball team, Fenway Park.

Ayre said in a separate interview on liverpoolfc.com that discussions about a possible move over the last two years had centred on the financial sense of building a new ground.

For an outlay of more than 300 million pounds, capacity would only increase by about 15,000 from the existing 45,000 at Anfield, which Ayre said "makes it very difficult to make it viable" economically.

There was also the emotional factor to take into account, he added.

"We've had some of the greatest triumphs in our history here, so it makes sense if there's a right solution that this is the place we should continue to play our football," he added.

The latest proposals showed for the first time that there was an increasing consensus about re-development, "not for the needs of the football club but actually the needs of the community".