Liverpool legend John Barnes has said the recent report into the 1989 Hillsborough tragedy has ended the "lie" that the Anfield club's fans caused the stadium disaster that left 96 people dead. 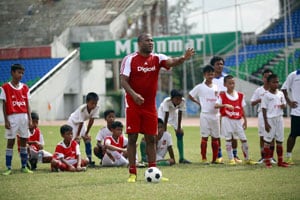 Liverpool legend John Barnes has said the recent report into the 1989 Hillsborough tragedy has ended the "lie" that the Anfield club's fans caused the stadium disaster that left 96 people dead.

Speaking in Myanmar on Thursday, where he has been training young footballers, the former England star -- who was playing in the FA cup semi-final as the horrors unfolded -- said the record had finally been set straight.

"I am happy... the truth has come out," he said, welcoming a new inquiry into the tragedy at a FA Cup semi-final match between Liverpool and Nottingham Forest.

"But for me, the most important thing is the truth to be told. Another truth has been told. The Liverpool fans are now free of any blame."

Relatives of the dead are calling for an immediate criminal investigation after the Hillsborough Independent Panel report released earlier this month found that police attempted to cover up their failings in the aftermath of the crush which caused the darkest day in English football history.

The Anfield hero is in Myanmar for a week, holding training sessions with youngsters and coaches in the former army-ruled country, which is currently ranked a lowly 183rd by FIFA, football's governing body.

Barnes, who sparkled as a winger for Liverpool and England before going into management, said Myanmar's young footballers were as talented as their contemporaries anywhere in the world.

"They've got skill. They've got good ability. They've got techniques. All they need is the opportunity," he said after a coaching session with dozens of youngsters at the Thuwanna Stadium in Yangon.

In November Football's governing body FIFA lifted a ban on Myanmar's participation in the 2018 World Cup which was imposed after a riot in Yangon forced an international against Oman to be abandoned.