Defending champions Manchester City, reeling from a two-season European ban for breaching fair play rules, are in second place in the table but have no chance of winning a third straight title. 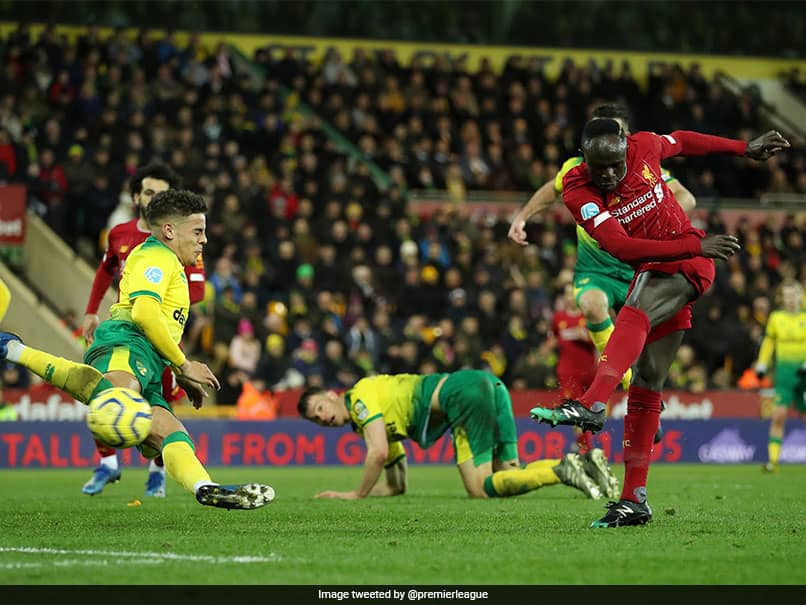 Liverpool have earned 103 points from the past 105 available to them in the Premier League.© Twitter@premierleague

Jurgen Klopp described his team's 25-point lead at the top of the Premier League as "insane" after Sadio Mane struck to give Liverpool a 1-0 win at storm-hit Norwich on Saturday. The champions-elect were short of their fluent best in blustery conditions caused by Storm Dennis at Carrow Road but returned immediately to winning ways after their winter break.

They have now gone 43 top-flight matches unbeaten, just six behind Arsenal's record of 49 games in 2003-04 and are sprinting towards their first league title for 30 years.

Liverpool have earned 103 points from the past 105 available to them in the Premier League, winning 34 of their past 35 matches, and have one more point -- 76 -- than Manchester United accrued in winning the league in 1996/97.

Klopp said the wind and Norwich's organisation made it a tricky game but that his players remained calm.

"I could tell in all the players' faces that they weren't nervous, they were enjoying it, and if one team was going to score it was going to be us," he told Sky Sports.

"We protected against the counter-attack well too. It's really all about these wonderful football players.

"The gap is so insane, I don't really understand it. I'm not smart enough. I've not had that before. It's outstanding, it's so difficult. I go back into the changing room and we chat about the things and then I'm like 'oh, but congratulations. We won the game, another three points'."

The result leaves Daniel Farke's Norwich rooted to the bottom of the table, six points behind 19th-placed Watford. They look set for an immediate return to the Championship despite their battling performance.

Klopp brought back midfielder Naby Keita for his first start in a Premier League match since December and Mane was on the bench as Liverpool started full of confidence.

The visitors controlled possession in the early stages without creating many clear-cut openings but Norwich managed some brief spells of attractive passing football themselves.

Liverpool forward Roberto Firmino was particularly impressive, producing an exquisite piece of skill to control a long Jordan Henderson pass before the ball was stolen off his toes as he shaped to shoot.

But Farke's men kept Liverpool quiet and came close to snatching the lead themselves.

Lukas Rupp got in behind the Liverpool defence and controlled a long ball over the top. He opted to pass to his left to Teemu Pukki but Alisson Becker produced a superb save, clawing the ball away at the feet of the Finnish striker.

Liverpool were quickly on top again in the second half but struggled to create clear chances until Keita tested Tim Krul from distance in the 58th minute.

The Anfield giants laid siege to the Norwich goal but frustration mounted as the home side somehow kept the score at 0-0.

Keita should have done better when he reacted quickly to a rebound off Krul but the goalkeeper dived to his right to deny the Guinea international.

Alexander Tettey almost caught Becker out on a rare Norwich foray into the Liverpool half, thundering a shot against the near post as the home crowd roared their team on.

Just when it seemed Norwich could become only the second team this season, after Manchester United, to deny Liverpool all three points, Mane broke the deadlock.

The second-half substitute controlled a long ball from Henderson with his right foot in the 78th minute before lashing home with his left.

Defending champions Manchester City, reeling from a two-season European ban for breaching fair play rules, are in second place in the table but have no chance of winning a third straight title.

European champions Liverpool can now turn their thoughts to the first leg of their Champions League last-16 tie against Atletico Madrid on Tuesday.

Liverpool English Premier League Football
Get the latest updates on IPL 2021, IPL Points Table , IPL Schedule 2021 , live score . Like us on Facebook or follow us on Twitter for more sports updates. You can also download the NDTV Cricket app for Android or iOS.