Jurgen Klopp was adamant results remain important to him in Liverpool's closing games after the newly crowned Premier League champions were humbled 4-0 by Manchester City. 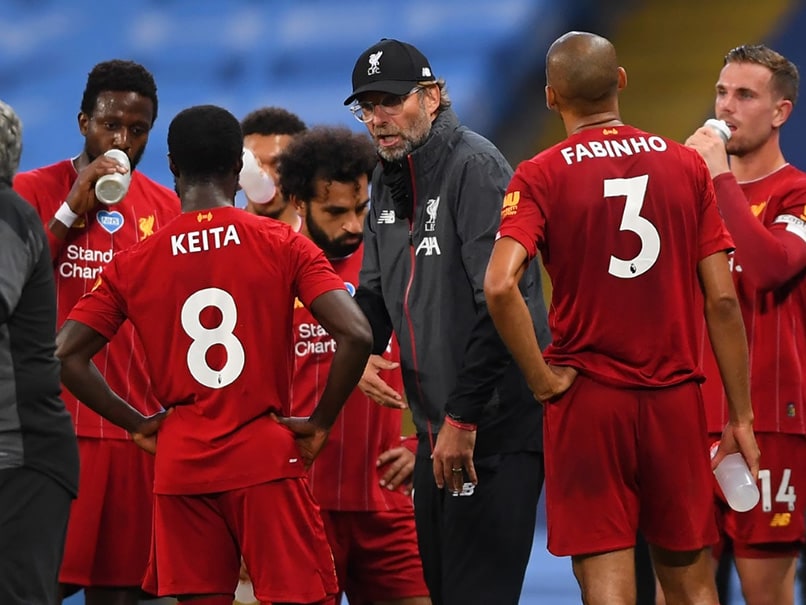 Liverpool suffered a 4-0 loss at the hands of spirited Manchester City side.© AFP

Jurgen Kloppwas adamant results remain important to him in Liverpool's closing games after the newly crowned Premier League champions were humbled 4-0 by Manchester City. The Reds came down to earth with a bump at the Etihad on Thursday in their first match since securing the title last week. Klopp's side still have a 20-point lead over Pep Guardiola's second-placed teambut with six games remaining but the German boss still wants to finish strongly.

"If someone said the result didn't matter for my team, I cannot help them," Klopp said.

"Yes, results matter a lot. I am not only looking for results but we want to win football games -- that is the reason we work on the training ground, go to away games and play home games."

One motivating factor could be the challenge of beating City's record of 100 points from two seasons ago.

Liverpool, who have dropped points in just four games this season, currently have 86 ahead of Sunday's home clash with Aston Villa.

"To get there we have to win football games and we didn't do that here," he said.

"So now we make sure we are ready for Aston Villa and the points tally at the end of the season is the result of the results we collect until then."

Liverpool started brightly against City, with Mohamed Salah testing Ederson and then hitting the post, but the hosts took charge after Kevin De Bruyne opened the scoring from the penalty spot on 25 minutes.

Further goals came from Raheem Sterling and Phil Foden before Alex Oxlade-Chamberlain put a Sterling shot into his own net.

Despite the big points gap, City remain a potent force and could end the season with Champions League glory.

"It's a reminder how good Man City are," Klopp said. "I didn't need that, I knew it before. The surprise that it's still possible, nice, that in a league where City are playing, someone else can be champions. That's not very likely with the quality they have.

"We will see next season but it's a while until then. Next season we will think about next season."

Manchester City English Premier League Football Jurgen Klopp
Get the latest updates on Fifa Worldcup 2022 and check out  Fifa World Cup Schedule, Stats and Live Cricket Score. Like us on Facebook or follow us on Twitter for more sports updates. You can also download the NDTV Cricket app for Android or iOS.