Bottom placed Burney and QPR slid further towards relegation following their loses to West Ham and Liverpool, respectively. Burnley lost 1-0 at West Ham United while Liverpool cruised to a 2-1 win over QPR. 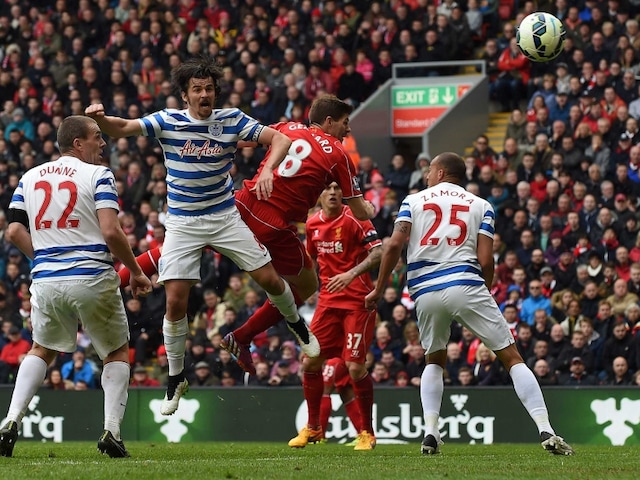 Burnley and Queens Park Rangers were both left on the verge of relegation from the Premier League following an eventful day at the foot of the table on Saturday.

Bottom club Burnley, promoted last season, lost 1-0 at West Ham United, who prevailed through a 24th-minute Mark Noble penalty after visiting defender Michael Duff had been sent off for a foul on Cheikhou Kouyate.

He added: "The way the team operate, they will give everything and we will continue to do that."

Dyche's side are now eight points adrift of safety with only nine points still to play for and QPR are only a point better off following a 2-1 defeat at Liverpool. (Rio Ferdinand's Wife Dies)

The game at Anfield took place against a sombre backdrop, with players from both teams sporting black armbands in tribute to Rebecca Ellison, wife of QPR defender Rio Ferdinand, who died of breast cancer on Friday night.

Liverpool manager Brendan Rodgers was targeted by a protest banner calling for his dismissal that was flown over the stadium by a small plane, but he saw his side take a 19th-minute lead through Philippe Coutinho.

Leroy Fer equalised with a volley from a Joey Barton corner in the 73rd minute, before Liverpool captain Steven Gerrard saw a penalty saved by former England colleague Rob Green.

But the momentum swung back in the hosts' favour when Nedum Onuoha was sent off for a second bookable offence and Gerrard atoned for his penalty blunder by heading home an 87th-minute winner.

"It is an extremely difficult time for Rio and his family," said QPR manager Chris Ramsey.

"It puts all this in its place. We would have liked to win today, but thoughts are now with Rio. Hopefully his family can pull together after this untimely tragedy."

Sunderland moved in the opposite direction after Jordi Gomez scored two penalties in a 2-1 win at home to Southampton, who replied through Sadio Mane and had James Ward-Prowse sent off.

The victory left Dick Advocaat's side a point below fourth-bottom Leicester City with a game in hand.

Aston Villa likewise bolstered their chances of avoiding the drop as Christian Benteke took his tally to 11 goals in nine games with a brace in a 3-2 win over Everton.

Tom Cleverley also scored for Villa, with Romelu Lukaku and Phil Jagielka hitting back for Everton, as Tim Sherwood's side preserved their two-point cushion over the bottom three.

Leicester had earlier enhanced their survival hopes with a one-sided 3-0 home win over flatlining Newcastle United.

Argentine striker Leonardo Ulloa put Leicester in front with a header after only 36 seconds at the King Power Stadium and skipper Wes Morgan made it 2-0 with another header in the 17th minute.

Ulloa added a third goal with a penalty early in the second half and Newcastle finished the game with nine men after defenders Mike Williamson and Daryl Janmaat were both sent off for two bookable offences.

"We have to give our supporters something to believe in," said Leicester manager Nigel Pearson, who hit the headlines for branding a journalist "an ostrich" after his side's 3-1 loss to Chelsea on Wednesday.

"They (Newcastle) still have more points than us. They've still got work to do, but so do we."

It was Leicester's fifth win in six league games and took them to within a point of John Carver's Newcastle, who have lost eighth consecutive league games.

Long-time leaders Chelsea will look to secure the title on Sunday when they host Crystal Palace needing three points to become champions.

Comments
Topics mentioned in this article
Liverpool Queens Park Rangers Burnley West Ham United English Premier League Football
Get the latest Cricket news, check out the India cricket schedule, Cricket live score . Like us on Facebook or follow us on Twitter for more sports updates. You can also download the NDTV Cricket app for Android or iOS.