West Brom were almost level in the 68th minute when Graham Dorrans crashed a free-kick against the crossbar. In a frantic finish, Steven Pienaar then hit the post for Everton before Moyes' men hung on for the three points. 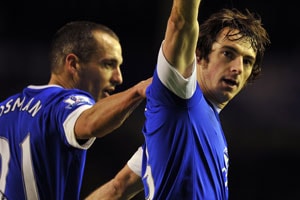 England defender Baines grabbed both his goals in the first half at Goodison Park as Everton stayed in fifth spot in the Premier League, just one point behind Tottenham, who were held 1-1 at Norwich.

Substitute Shane Long claimed a second-half consolation for West Brom, who have now taken just one point from a possible 15.

"I thought it should have been more straightforward. We gave away a really shabby goal," said Everton manager David Moyes.

"Leighton is a special player and he continues to add something to our team. I see him getting better in lots of ways, his football intelligence and how he can improve his and the team's performances."

Baines grabbed the opener after 27 minutes with a fierce drive which soared past Ben Foster in the West Brom goal after being set up by Leon Osman.

Baines added a second on the stroke of half-time from the penalty spot -- his 10th successful spot-kick in 10 attempts in his Everton career -- after Victor Anichebe was fouled in the area by Claudio Yacob.

Yacob had only been on the pitch for five minutes after coming on as a substitute for George Thorne.

Everton were worth their advantage, but they were stunned in the 65th minute when West Brom, who had won the teams' first meeting 2-0 earlier in the season, pulled one back.

Long was the man on target when he pounced on some hesitant defending from John Heitinga to head in past Tim Howard.

Long, who had replaced James Morrison just four minutes earlier, was first to the ball delivered by Romelu Lukaku.

West Brom were almost level in the 68th minute when Graham Dorrans crashed a free-kick against the crossbar.

In a frantic finish, Steven Pienaar then hit the post for Everton before Moyes' men hung on for the three points.

"It's not been a good start to the year for us," said West Brom boss Steve Clarke. "We gave ourselves too much to do and we have been doing that too much recently."

Comments
Topics mentioned in this article
Football Everton Manchester City West Bromwich Albion Mark Hughes Shane Long Leighton Baines Alex Ferguson English Premier League
Get the latest updates on ICC T20 Worldcup 2022 and CWG 2022 check out the Schedule, Live Score and Medals Tally. Like us on Facebook or follow us on Twitter for more sports updates. You can also download the NDTV Cricket app for Android or iOS.