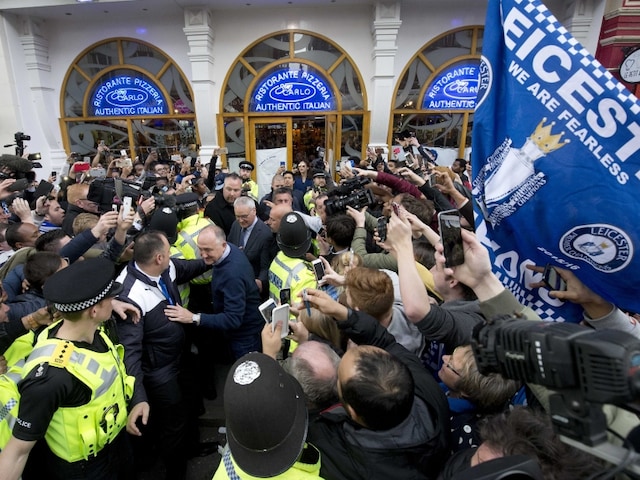 Leicester City's Italian football manager Claudio Ranieri (centre) is mobbed by fans as he leaves an Italian restaurant after having lunch with his team.© AFP

Leicester City's triumphant Premier League title-winners were acclaimed by well-wishers as they enjoyed a celebratory lunch at an Italian restaurant in the city on Tuesday.

Restaurant manager Andrea Villotti revealed that the Leicester party had dined on lobster but not pizza during a two-and-a-half-hour lunch and that Ranieri and his players had politely declined champagne.

"It was a dream, a dream come true," he told Britain's Press Association. "They're really nice people."

Villotti said the restaurant would honour Leicester's success with a special dish, something "blue" and with "a little bite".

After news of Leicester's dining plans leaked out, restaurant staff had to cover up the windows with large tablecloths as a huge throng of fans gathered outside.

Vardy invited his team-mates round to his house to watch Monday's 2-2 draw between Chelsea and second-place Tottenham Hotspur, which handed Leicester the title.

Ranieri, who watched the match at home with his wife, told Sky Sports: "I believed last night. Of course you feel something, but I am a pragmatic man and I know football well. Something strange could happen.

"It was an amazing achievement. We wanted to do something special, but no one could have believed we would do this. I was at home with my wife. Nothing more. I celebrate with my wife and family."

Leicester's 5,000-1 triumph sent fans spilling into the streets of the east Midlands city, with around 1,000 assembling at the club's King Power Stadium.

Captain Wes Morgan will be presented with the trophy after Saturday's final home game against Everton.

"I am going to try to hold back the tears," said Morgan, a Jamaica international. "It is going to be very emotional.

"It hasn't sunk in yet. It was a long night celebrating and I am feeling a bit drained at the moment. After the initial euphoria a lot of people couldn't believe what had happened. There were a few tears."

Comments
Topics mentioned in this article
Leicester City Jamie Vardy Wes Morgan English Premier League Football
Get the latest Cricket news, check out the India cricket schedule, Cricket live score . Like us on Facebook or follow us on Twitter for more sports updates. You can also download the NDTV Cricket app for Android or iOS.