Divock Origi scored in the 96th minute -- his first Premier League goal -- to earn Liverpool F.C. a 2-2 draw in a heated match against West Bromwich Albion. 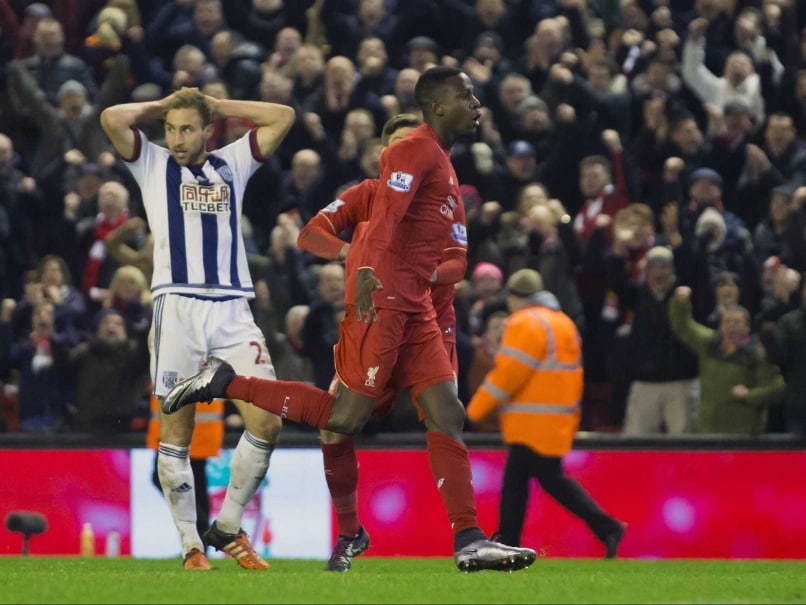 Liverpool captain Jordan Henderson marked his first league start since August by finishing a superb move with a sweet half-volley to give the home side the lead mid-way through the first half.

Craig Dawson equalised for Albion after half an hour, turning in the loose ball after goalkeeper Simon Mignolet had failed to deal with a corner.

Liverpool looked uncertain whenever defending set-pieces and almost went behind right on half-time as Jonas Olsson volleyed in Craig Gardner's free-kick, only to be correctly ruled offside after a long delay.

The Sweden centre-back was not to be denied a goal, though, rising at the near post to glance in Chris Brunt's corner with 17 minutes left.

There followed a sour incident as Dejan Lovren was carried off on a stretcher with his leg in a brace after a challenge by Gardner, who followed through and caught the centre-back on the knee.

But towards the end of eight minutes of time added on for Lovren's injury, Origi's deflected 25-yard shot prevented Liverpool from succumbing to a second straight defeat after last weekend's 2-0 loss at Newcastle United.

Liverpool manager Jurgen Klopp, who had been involved in a number of touchline disputes with his West Brom counterpart Tony Pulis during a bad-tempered second half, greeted the equaliser by punching the air.

But the loss of Lovren will be of serious concern to the Liverpool manager, whose side looked set for defeat until Origi -- the Croatian's replacement -- intervened.

Another significant talking point was the offside decision that denied Olsson just before the interval.

The West Brom defender thought he had given the visitors a 2-1 lead when he sneaked in unattended at the far post to volley in Gardner's free-kick.

Linesman Roger West did not raise his flag and only a couple of Liverpool players made any kind of appeal.

But West then called referee Craig Pawson over towards him and, after a delay, the goal was disallowed.

Television replays showed that it was the correct decision, with four Albion players in an offside position as Gardner took the free-kick, but it was unclear how Pawson and West had managed to spot it.

That incident came after Liverpool had taken the lead with a lovely goal, only to lose it as a result of some sloppy defending at a set-piece.

The opening goal came when Christian Benteke laid the ball back to Alberto Moreno, whose angled cross was headed down by Adam Lallana for Henderson to sweep in on the half-volley.

It was a special moment for Henderson, who has missed three months of the season with two separate foot injuries.

Liverpool should have been in front before their captain's 21st-minute goal as Philippe Coutinho blazed over from 15 yards after Gareth McAuley had headed Emre Can's diagonal chip straight to the Brazil international.

But any hopes Liverpool might have had of a comfortable afternoon disappeared as Albion equalised nine minutes after going behind.

Mignolet, who had earlier prevented a deflected Gardner cross-shot from sneaking in at his near post, failed to reach a corner as he collided with Benteke and Salomon Rondon worked the loose ball to Dawson, who prodded in.

Liverpool struggled to impose themselves in the second half. Lovren saw a glancing header deflected wide from James Milner's free-kick, but chances were otherwise hard to come by.

Albion went in front from another corner in the 73rd minute, as Olsson scored, only for Origi to have the last word.

Comments
Topics mentioned in this article
Liverpool West Bromwich Albion Divock Origi English Premier League Football
Get the latest updates on IND vs NZ 2021, check out the Schedule and Live Score . Like us on Facebook or follow us on Twitter for more sports updates. You can also download the NDTV Cricket app for Android or iOS.