Liverpool, who host Manchester United in the Europa League on Thursday, climb two places to seventh in the Premier League after recording a third successive league win for the first time in a year. 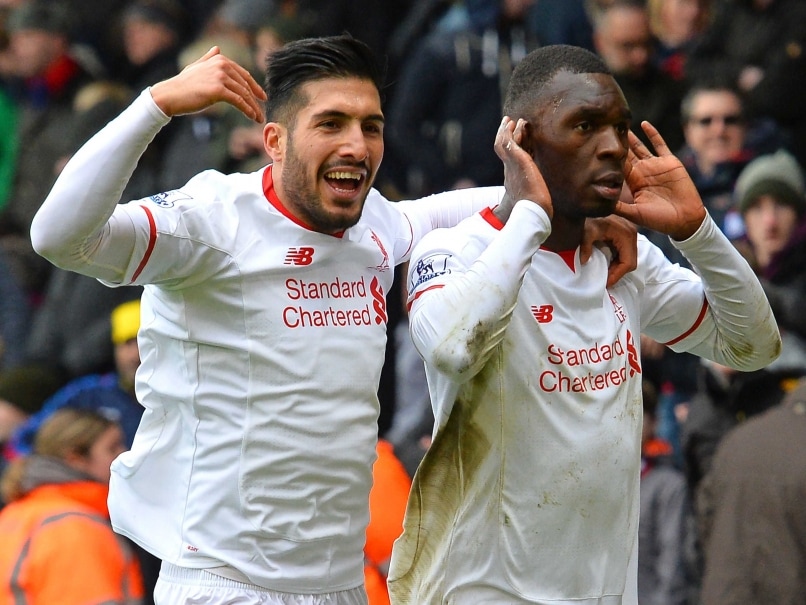 Christian Benteke (right), who came on as a substitute for Liverpool, was fouled in the box by Damien Delaney in 4th and final minute of injury time.© AFP
London:

Substitute Christian Benteke won and scored a 96th-minute penalty as 10-man Liverpool came from behind to win 2-1 at Crystal Palace in the Premier League on Sunday. (City Beat Liverpool in Penalties For League Cup Glory)

But a slip by Palace goalkeeper Alex McCarthy gifted Roberto Firmino a 72nd-minute equaliser, before Damien Delaney's rash challenge on Benteke enabled the Belgium striker to net the winner with a last-gasp penalty.

Jurgen Klopp's Liverpool, who host Manchester United in the Europa League on Thursday, climb two places to seventh after recording a third successive league win for the first time in a year.

It was a fifth consecutive home league defeat for Alan Pardew's Palace, who remain nine points above the relegation zone in 15th place.

A thigh injury cost Palace the services of in-form striker Connor Wickham, who had scored four goals in his previous two games, but Emmanuel Adebayor quickly set about proving himself a capable deputy.

He created the game's first clear chance in the seventh minute with a square pass for Yannick Bolasie, only for Liverpool goalkeeper Simon Mignolet to slide out bravely and save.

The Togo international then went close twice in as many minutes, first working Mignolet with a disguised shot towards the near post and then clattering the bar with a header from Pape Souare's left-wing cross.

Liverpool's carelessness in possession repeatedly gave Palace chances to attack them and in the 25th minute Yohan Cabaye rippled the side-netting from Wilfried Zaha's pass after Divock Origi had lost the ball.

Preferred up front to Benteke and Daniel Sturridge, Origi curled the ball onto the roof of the net from just outside the box in Liverpool's only opening of the first half.

Any hopes that the half-time break would give Liverpool time to clear their heads evaporated within three minutes of the restart as Ledley slammed in after Mile Jedinak and Souare had seen shots blocked.

It was the Wales international's first club goal in over a year.

Klopp reacted by introducing Philippe Coutinho for right-back Jon Flanagan, but within a minute his side were down to 10 men as Milner was shown a second yellow card for sliding in from behind on the fleeing Zaha.

However, while McCarthy had no trouble fielding Liverpool's first shot on target in the 65th minute, comfortably gathering a skidding effort from Firmino, seven minutes later his error allowed the visitors to level.

The 26-year-old slipped as he attempted to send the ball downfield, sending the ball straight to Firmino, and the Brazilian took a touch before gratefully slotting home his eighth goal of the league campaign.

For all their efforts in the latter stages, it seemed victory would elude Liverpool, with McCarthy saving twice from Benteke, an 80th-minute replacement for Origi, and Alberto Moreno hitting the post from range.

But in the dying seconds of the fourth and final minute of stoppage time, Delaney unwisely slid in on Benteke as he chased Jordan Henderson's pass down the inside-right channel.

The Ireland international pulled out of the challenge at the last moment, but his right knee clipped Benteke's left foot and shortly after the substitute coolly sent McCarthy the wrong way from the spot.

Comments
Topics mentioned in this article
Liverpool Crystal Palace Roberto Firmino Christian Benteke English Premier League Football
Get the latest updates on ICC T20 Worldcup 2022, check out the Schedule and Live Score. Like us on Facebook or follow us on Twitter for more sports updates. You can also download the NDTV Cricket app for Android or iOS.