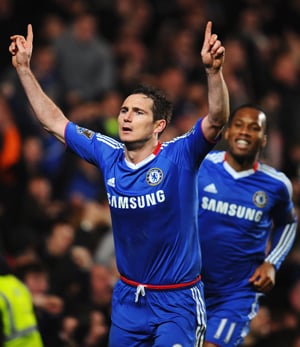 It was a hammer blow for United, who suffered just their second league defeat this season despite taking the lead through Wayne Rooney's first-half strike.

Brazilian defender David Luiz equalised with his first goal for Chelsea soon after half-time and Lampard sealed the points before captain Nemanja Vidic was sent off for a second booking in stoppage time.

While fourth-place Chelsea's hopes of retaining the title are still slender as they trail United by 12 points, their win has done a massive favour to second-place Arsenal.

The Gunners can close to within one point of Sir Alex Ferguson's team if they win their game in hand.

Ferguson was furious with Atkinson's penalty decision and the official's failure to send off Luiz for a series of hard tackles.

"We defended badly for the first goal, That was a bad one to lose but the penalty kick was so soft, deary me," Ferguson said.

"It's three years in a row that decisions have changed the game here. It was incredible.

"Luiz had done (Javier) Hernandez off the ball and nothing was done. Then he does Rooney, clear as day.

"You are talking about what changed the game in the second half, these are decisions that change the game and he is going to be refereeing every week!"

Blues boss Carlo Ancelotti added: "It was a very difficult game against a fantastic team, who showed great quality in the first half.

"We had difficulty to close their play but the second half was better because we put more pressure on and played with more intensity."

Ashley Cole, hit by revelations that he accidently shot a student with an air-rifle at Chelsea's training ground, was greeted with shouts of "shoot" from both sets of fans whenever he got anywhere near United's penalty area.

Ferguson's side, who last won at Chelsea back in 2002, threatened for the first time when Patrice Evra's low cross narrowly eluded Rooney and should have taken the lead moments later.

Nani's cross gave Rooney a clear sight of goal, but his woefully mistimed header sailed wide of the target.

However, Rooney, cleared to play after dodging an FA ban for his elbow on Wigan's James McCarthy, showed why he remains United's most dangerous force as he opened the scoring in the 30th minute.

Taking Nani's short pass in his stride, Rooney turned towards the penalty area and, with Branislav Ivanovic backing off, he had time and space to unleash a powerful low strike that arrowed into the bottom corner of Petr Cech's net.

Edwin van der Sar almost gifted Chelsea an immediate equaliser when he fumbled Lampard's venomous free-kick, but he recovered to block Ivanovic's attempt from the rebound and Vidic alertly cleared off the line.

The Blues drew level from virtually their first decent delivery of the match in the 54th minute.

Michael Essien floated over a teasing cross that Ivanovic flicked onto Luiz and he blasted a half-volley past van der Sar.

The goal seemed to bring out the street fighter in Luiz and he was booked for a bone-crunching tackle on Rooney before enraging Ferguson with a cynical body-check on the same player.

Rooney should have restored United's lead in the 64th minute when Nani's pass sent him sprinting clear of the Chelsea defence but he curled wide.

Ryan Giggs came on to make his 606th league appearance for United -- equalling Sir Bobby Charlton's record -- and he made an instant impression as his chipped pass put Rooney through to fire straight at Cech.

Another substitute, Zhirkov, had the decisive impact, however.

Didier Drogba and Lampard worked the ball towards Zhirkov and he stumbled under the slightest of touches from Smalling, prompting Atkinson to award a penalty.

Lampard slammed the 80th minute spot-kick past van der Sar and then Vidic deflected Zhirkov's shot onto a post before the Serbian defender saw red for tugging back Ramires.