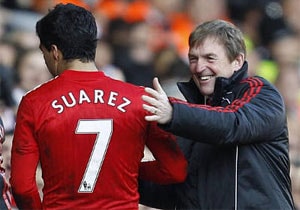 Liverpool great Kenny Dalglish has returned to Anfield as a member of the board 17 months after being sacked as Reds manager, the Premier League side announced Friday.

Former Scotland striker Dalglish, who first arrived at Liverpool from Celtic in 1977 and is widely regarded as the Merseysiders' best player of all-time, is to become a non-executive board director and will take up his position with immediate effect.

"It is an honour and privilege to be asked to return to Liverpool as a director of the club," said Dalglish, fired in May 2012 after a disappointing end to the season in his second spell in charge, in a Liverpool statement.

"I have always said if there is anything I could do to help this club I would make myself available -- when the call came I had no hesitation.

"I am looking forward to working with the board of directors and contributing to the strategic issues that affect Liverpool Football Club.

"Liverpool has given me and my family so much since we came here just over 36 years ago and my priority is and will always be to have the club's best interests at heart."

"We are delighted Kenny has accepted our offer to join Liverpool as a non-executive board director and we are sure he will make a valuable contribution to the club's strategy," principal owner John Henry said.

"Kenny has a unique relationship with our supporters and embodies everything that is special about Liverpool.

"We are proud and honoured to have him back at the club he has represented with such distinction."

Dalglish's successor as manager, Brendan Rodgers, far from being overawed by the five-times European champions' history, has actively sought the involvement of former Liverpool players.

This week Rodgers revealed how one-time Anfield favourites Robbie Fowler, Steve McManaman and Rob Jones had been brought on board to work with Liverpool's young players at the club's academy.

"When I met with Kenny to discuss this appointment, I was struck by the passion and drive he still has in wanting to see Liverpool return to where it should be; one of the most successful clubs in the world," Rodgers said.

"We are all together in that goal -- owners and supporters, players and management and also icons such as Kenny Dalglish.

"I want people around us who have this club and what it stands for in their heart."

Comments
Topics mentioned in this article
Football Alex Ferguson Steven Gerrard Fernando Torres Mark Hughes Liverpool Manchester City English Premier League
Get the latest updates on ICC T20 Worldcup 2022 and CWG 2022 check out the Schedule, Live Score and Medals Tally. Like us on Facebook or follow us on Twitter for more sports updates. You can also download the NDTV Cricket app for Android or iOS.