Jose Mourinho has been charged with rescuing Spurs' season after this week's sacking of Mauricio Pochettino, with the club desperate to claw their way back into the top four. 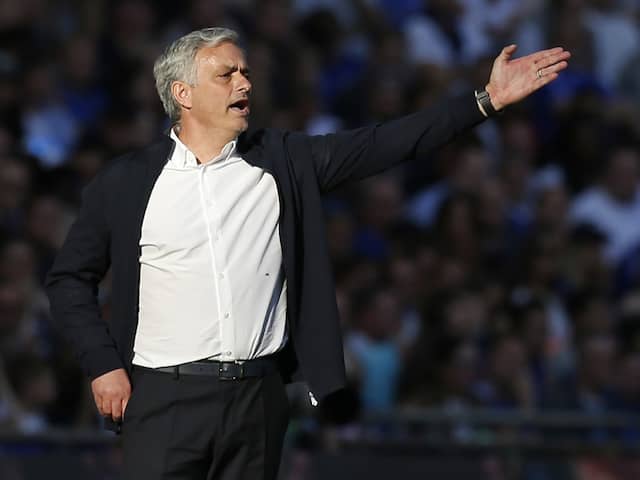 Jose Mourinho's first match in charge of Tottenham will be away to West Ham.© AFP

Jose Mourinho will inevitably be the centre of attention as he takes charge of Tottenham for the first time this weekend while Manchester City look to get their Premier League title challenge back on track against Chelsea. The former Chelsea and Manchester United manager has been charged with rescuing Spurs' season after this week's sacking of Mauricio Pochettino, with the club desperate to claw their way back into the top four. At the top of the table, runaway leaders Liverpool have a winnable-looking fixture away to Crystal Palace but the chasing pack cannot afford to allow the gap to widen further.

City, licking their wounds after their 3-1 defeat by Liverpool earlier this month, host Frank Lampard's Chelsea, who are one point above them in the table, eight points behind Jurgen Klopp's side.

Leicester, in second place, ahead of Chelsea on goal difference, travel to England's south coast to take on Brighton.

AFP Sport picks out some of the talking points ahead of the weekend's matches:

Mourinho's first match in charge of Tottenham will be away to West Ham at the London Stadium on Saturday but he will not have the luxury of a honeymoon period.

The Portuguese boss has a number of issues to sort out, including addressing the woeful away form -- Spurs have not won on the road in the Premier League since January.

Last season's Champions League finalists have had a shocking start to the season, languishing in 14th place in the Premier League after just three wins in their opening 12 games.

With their new stadium to pay for, Tottenham are reliant on Champions League revenue but the outlook is not bright.

No team with as low a tally as Spurs have after 12 games -- 14 points -- has ever gone on to record a top-four finish.

Mourinho, often labelled a cheque-book manager, has made the right noises so far, saying at his first press conference he will not demand millions to spend in the transfer market.

"I don't need players, I am so happy with the players I have, I just need time to understand them better, to know everything about them," he said.

"My gift is this squad, the squad is very, very good."

Over their past 38 league games, Liverpool have tallied 101 points and lost just once, overcoming champions Manchester City in their most recent outing.

Manager Klopp last season labelled his players "mentality monsters" and captain Jordan Henderson says that is a crucial factor in their success.

"Our mentality is just as important as the technical ability of the team," Henderson told the club's website.

"I think everybody sees how talented the squad is, how many good players we've got in the team, but mentality is huge in football."

Lampard, who spent a season playing for Manchester City after leaving Chelsea, takes his young side to the Etihad for his first visit as a manager.

Pep Guardiola's side host Chelsea in the unusual position of being fourth in the table, a point and place below the visitors, who have had six successive league wins.

Chelsea will also be eager to gain revenge for their 6-0 mauling by City last season -- their biggest-ever Premier League defeat.

Former Leicester and Tottenham forward Gary Lineker believes Brendan Rodgers' side are better than the team that lifted the Premier League title in 2016.

The club have already played all the members of the "Big Six" apart from Manchester City and sit in second spot in the Premier League with a winnable set of matches to come.

"It's a great place to be at the minute," he told the club's website. "You can see the buzz around the club and as a player, being involved in it is great.

"We're going into most games at the minute thinking we're going to win. It's a great feeling to be as confident as we are as a team and as individuals as well."

Manchester City Football Jose Mourinho English Premier League
Get the latest Cricket news, check out the India cricket schedule, Cricket live score . Like us on Facebook or follow us on Twitter for more sports updates. You can also download the NDTV Cricket app for Android or iOS.