Asked if Terry would start, Benitez added: "No, but he is available. It's good news for us. He has been out for 16 weeks. 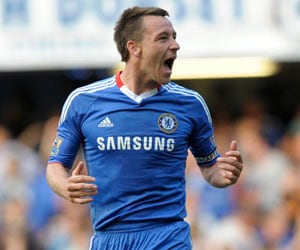 John Terry has been named in Chelsea's squad for Saturday's Premier League game at Stoke City, having made his comeback from a two-month injury lay-off in a game for the club's under-21s.

Terry made a 45-minute appearance against Fulham's under-21s at Chelsea's training ground on Thursday, in his first competitive appearance since damaging knee ligaments in a game against Liverpool on November 11.

Interim manager Rafael Benitez confirmed on Friday that his captain would return to the squad for the trip to Stoke, but said that the 32-year-old would not start the game.

"He played yesterday. He was OK," Benitez said.

"He has been training today. He is in the squad."

Asked if Terry would start, Benitez added: "No, but he is available. It's good news for us. He has been out for 16 weeks."

Speaking on Thursday, Terry said he had been encouraged by his performance in the under-21s match.

Benitez was in attendance and Terry, wearing his usual number 26 shirt, made an assured return to action before being substituted at half-time with the score 0-0.

"I have come through all right," Terry told Chelsea TV.

"Initially I was going to play between 30 and 45 (minutes), so I managed to get through the first half and the knee feels totally fine, which is the main thing. It has been a frustrating two months, really.

"I felt fine, totally fine -- passing, tackling, everything felt fine. It's really positive to come through a game and hopefully give myself a chance to be back involved with the first team."

Chelsea have lost two of their last three matches, going down 1-0 at home to bottom club Queens Park Rangers in the league and losing 2-0 at home to Swansea City in the first leg of their League Cup semi-final on Wednesday, either side of a 5-1 win at Southampton in the FA Cup.

The European champions go into the game at Stoke in fourth place in the league table, 14 points behind leaders Manchester United and seven points below second-place Manchester City but with a game in hand.

Comments
Topics mentioned in this article
Football Manchester City Arsenal Liverpool Stoke City Mark Hughes John Terry Alex Ferguson English Premier League
Get the latest updates on ICC T20 Worldcup 2022 and CWG 2022 check out the Schedule, Live Score and Medals Tally. Like us on Facebook or follow us on Twitter for more sports updates. You can also download the NDTV Cricket app for Android or iOS.