John Terry out for weeks not months - Chelsea

John Terry has suffered "no significant damage" following a scan on his right knee and will be out for weeks rather than months, Chelsea announced on Monday. 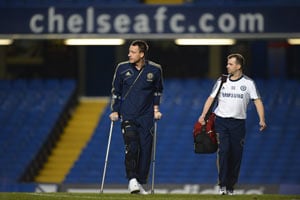 John Terry has suffered "no significant damage" following a scan on his right knee and will be out for weeks rather than months, Chelsea announced Monday.

Injury cut short Terry's return to action during the Blues' 1-1 draw at home to Liverpool in the Premier League on Sunday.

"Chelsea Football Club's medical team will conduct further tests over the next two or three days once the swelling has subsided to determine how long John will be out, but it will be a matter of weeks not months."

Having to do without Terry for any length of time is still a blow to Chelsea, who have struggled defensively in their captain's domestic four-game absence while serving a racism ban and have slipped from first to third in the Premier League.

Terry is now in line to miss the European champions' potentially vital Champions League Group E game at Juventus, as well as league matches against West Brom and Manchester City.

He could even be a doubt for Chelsea's Club World Cup trip to Japan early next month.

But goalkeeper Petr Cech, Chelsea's acting captain in the absence of Terry and Frank Lampard, said the side could cope without the centre-half.

"We managed to play games without him and we have players who will have a chance to impress," he said.

"I have confidence. Obviously, it's a pity we will lose him again but we have a large squad and quality defenders to deal with that."

Terry, in his first league match since serving a four-game ban for racially abusing Queens Park Rangers defender Anton Ferdinand in a match last season, scored against Liverpool at Stamford Bridge with a 20th-minute header.

It was the former England defender's 50th goal in all competitions for Chelsea but he was forced to leave the fray less than 20 minutes later.

Terry went down clutching his right leg after an accidental collision with Liverpool striker Luis Suarez and was carried from the field on a stretcher in the 39th minute, with Gary Cahill coming on in his place.

His departure left Chelsea down to two fit centre-backs in Cahill and Branislav Ivanovic, with David Luiz sidelined by tonsilitis and Ashley Cole nursing a hamstring problem.

Uruguay international Suarez took to Twitter after the game to send Terry his best wishes.

"Hugs to Terry, I hope it's nothing serious," he wrote.