Asked if Terry could feature against Stoke, former Liverpool boss Benitez added: "It depends on his reaction. Obviously Thursday will be a different kind of game but we will see how he feels. 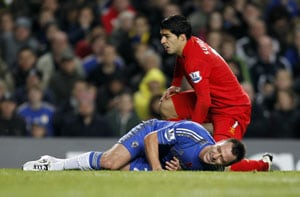 Chelsea captain John Terry is making progress in his bid for a return to first-team action and could feature in this weekend's Premier League match against Stoke, manager Rafael Benitez said on Tuesday.

The 32-year-old former England centre-back has been out of action for the European champions since a 1-1 draw with Liverpool on November 11 following a collision with Luis Suarez.

Initial indications were Terry would be out for three weeks but he is still to play first-team football nearly two months on.

Terry is due to face Chelsea's west London rivals Fulham as an over-age player when the clubs Under-21 teams meet on Thursday and interim Blues boss Rafael Benitez said it was possible the defender could feature at Stoke on Saturday.

"John Terry has been training and we are considering playing him on Thursday with the Under-21 team," Benitez said.

"The good thing he is now training so now he can carry on," the Spaniard added. "We will see how he feels on Thursday and hopefully he can play more minutes in the short-term so we will see.

"At least that is a positive thing because before he was just doing the warm-up. Now he is training and can play so I think we are obviously closer."

Asked if Terry could feature against Stoke, former Liverpool boss Benitez added: "It depends on his reaction. Obviously Thursday will be a different kind of game but we will see how he feels.

"If he can feel okay and train the day after, at least we can start considering him as an option."

Chelsea face Swansea in the first leg of the League Cup quarter-finals at Stamford Bridge on Wednesday.

Comments
Topics mentioned in this article
Football Liverpool Arsenal Manchester City Stoke City John Terry Mark Hughes Alex Ferguson English Premier League
Get the latest updates on ICC T20 Worldcup 2022 and CWG 2022 check out the Schedule, Live Score and Medals Tally. Like us on Facebook or follow us on Twitter for more sports updates. You can also download the NDTV Cricket app for Android or iOS.