Joey O'Brien had never scored in the English top-flight despite a long career at that level with Bolton and now West Ham, but the 26-year-old chose the perfect moment to end his drought. 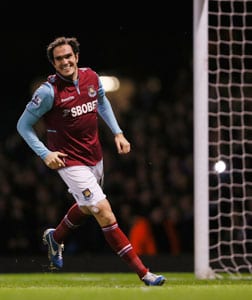 West Ham rescued a 1-1 draw against Stoke at Upton Park on Monday thanks to Joey O'Brien's first ever Premier League goal.

Republic of Ireland right-back O'Brien had never scored in the English top-flight despite a long career at that level with Bolton and now West Ham, but the 26-year-old chose the perfect moment to end his drought.

Sam Allardyce's side trailed to a goal early in the first half from Stoke striker Jonathan Walters until O'Brien slotted home from close-range three minutes after the interval to earn his moment as the unlikely hero.

O'Brien's intervention maintained West Ham's impressive start to the season and they remain seventh in the table, level on points with Arsenal, and above the likes of Tottenham, Liverpool and Newcastle.

Stoke's seventh draw from 12 league matches this season kept Tony Pulis's team clear of the relegation zone, although it also extended their winless run on their travels to 16 matches.

"We could have finished them off with more clinical finishing, but there is another point on the board for us and we have to settle for that," Allardyce said.

"I liked the way we sustained the pressure on Stoke, the belief and the spirit was not dented by the early goal."

Pulis added: "We worked on the routine that produced our goal for two or three days and never scored once in training!

"But it was a great ball in and a great finish by Jon Walters. I'm not supposed to say this, but we obstructed a player."

After all the pre-match talk that this would be a bruising battle between two sides who prefer the aggressive route-one approach, it was fitting that Stoke's early opener arrived via a set piece rather than a intricate passing move.

Pulis's side took the lead in the 12th minute when Glenn Whelan's corner was met by Walters, who timed his run perfectly to drive his shot past Hammers goalkeeper Jussi Jaaskelainen and beyond Andy Carroll's attempt to clear off the line.

That was Walters' third goal of the season and Stoke could have been further in front before half-time when midfielder Steven Nzonzi lashed a fierce strike against the crossbar from long-range.

Just before that referee Chris Foy had turned down West Ham's penalty appeals after Geoff Cameron's push on Carroll.

But the hosts came out with more energy in the second half and Kevin Nolan should have equalised almost immediately when the midfielder's close-range header from George McCartney's cross was straight at goalkeeper Asmir Begovic.

Nolan didn't have worry for long though as West Ham equalised in the 48th minute when Gary O'Neil crossed from the right for O'Brien to flick home.

Allardyce's men came closest to winning it when Carroll flicked on Mark Noble's corner and Modibo Maiga pounced to fire in a shot that Begovic saved well.