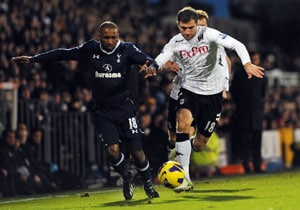 Jermain Defoe bagged a brace as Tottenham cruised to a 3-0 win against Fulham that lifted the north London club into fourth place in the Premier League on Saturday.

Spurs boss Andre Villas-Boas this week claimed Defoe is as good as Colombia star Radamel Falcao, the Atletico Madrid striker regarded as one of the world's best forwards, and the England international repaid that compliment with a clinical display at Craven Cottage.

Defoe, 30, took his goal tally for the season to 12 with a pair of cool finishes in the second half after Brazilian midfielder Sandro broke the deadlock soon after the break.

Steve Sidwell threatened for Fulham in the early stages, but French goalkeeper Hugo Lloris charged off his lane to collect before the midfielder had a chance to shoot.

Ashkan Dejagah set up Kerim Frei as the hosts pressed again, but the opportunity was squandered by a poor finish.

Villas-Boas was forced into an early change when Dawson was injured while clearing a cross, then, not for the first time this season, Wales winger Bale was booked for diving.

Mladen Petric muscled Sandro off the ball and found Sidwell as Fulham pushed for an opener just after the break, but he dragged his shot wide.

After a slow start Spurs took the lead in the 55th minute when Sandro collected Mousa Dembele's pass and carried the ball forward before unleashing a powerful 30-yard drive that beat Mark Schwarzer via a post.

That proved to be Bale's last contribution as he hobbled off with a hamstring problem. Fortunately for Spurs, Defoe was able to ensure Bale wasn't missed.

In the 72nd minute he took Gylfi Sigurdsson's pass in stride and he made no mistake with a close range finish.