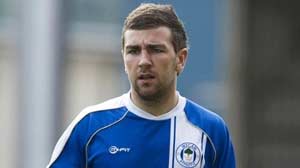 McArthur, 24, has been rewarded for playing a key part in the Latics' top-flight survival as Roberto Martinez's side climbed away from the relegation zone with impressive wins over Manchester United, Arsenal, Liverpool and Newcastle United in the closing weeks of the season.

"I'm delighted to extend my stay at the club after what has been a fantastic season for Wigan and for me personally," McArthur said.

Martinez, whose own future remains unclear after he was given permission to speak to Liverpool about succeeding Kenny Dalglish at Anfield, added: "James has grown since the day he arrived at Wigan.

"His attitude, desire and daily standards make him an example for any young professional footballer.

"This season he has managed to put all the hard work on the training ground into effective performances on the pitch, helping the team to achieve outstanding results against the best sides in European football."