Despite the nerve-jangling escape, Newcastle are without a win in their last five league matches and the threat of sinking into the Championship grows more serious by the week. 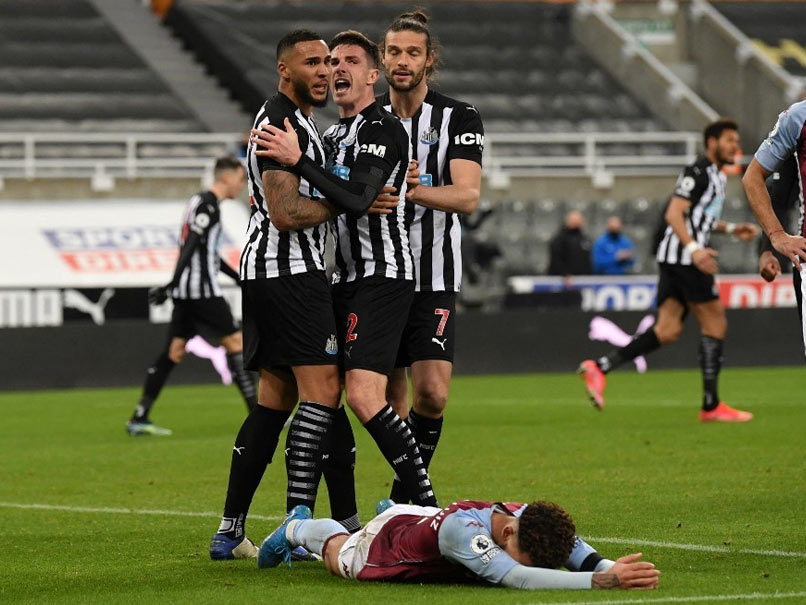 Newcastle United earned a 1-1 draw in a dramatic finale against Aston Villa.© AFP

Jamaal Lascelles rescued Newcastle with a last-gasp equaliser as the Premier League strugglers earned a 1-1 draw in a dramatic finale against Aston Villa on Friday. Steve Bruce's side fell behind with only four minutes left at St James' Park when Newcastle defender Ciaran Clark deflected Ollie Watkins' header into his own net. But Newcastle captain Lascelles bailed out his troubled team just seconds from the final whistle at St James' Park. "The goal they scored was a bit of a fluke. Then you have to show desire to get back into it and we did that. We at least deserved that," Bruce said.

Despite the nerve-jangling escape, Newcastle are without a win in their last five league matches and the threat of sinking into the Championship grows more serious by the week.

They are just two points above the relegation zone and both third bottom Fulham and fourth bottom Brighton would go above them if they win this weekend.

"There are still 10 games to go. We've got to show the same attitude. I'm still convinced we'll be OK," Bruce said.

The Magpies were 10 points clear of Fulham last month, but now Bruce is fighting to avoid the sack as a turbulent season reaches boiling point.

The former Manchester United defender has been involved in a dressing room row with Newcastle winger Matt Ritchie, while feuding with the media and enduring criticism from frustrated fans.

Next week's clash against Brighton looms as a defining moment in the campaign for Newcastle.

"There is no question managing Newcastle is always difficult. There's a huge spotlight and that's the way it should be. I'm ready for the challenge and my experience I hope will prove vital," Bruce added.

In the absence of the injured Callum Wilson, Newcastle striker Dwight Gayle was handed just a second start of the season.

Newcastle had failed to win any of six league games when Wilson was absent this season and once again they were impotent without him.

Villa had the upper hand in the first half and Martin Dubravka had to race off his line to stop Watkins in his tracks.

Dubravka was called into action again to repel Trezeguet's stinging strike from a tight angle.

Bruce's men desperately needed a stroke of luck to get on the scoresheet and Villa defender Matt Targett nearly gifted them one when his miscued header forced Emiliano Martinez to save.

Jacob Murphy came off the bench for Newcastle and nearly made an instant impact, cutting inside the Villa area for a curling strike that cannoned back off the bar.

Villa snatched the lead in the 86th minute when Watkins stooped to meet Targett's cross with a header that hit Clark on the knee and went in off the woodwork.

Newcastle refused to surrender and Joelinton's effort was saved by Martinez before Lascelles saved the day.

In the fourth minute of stoppage-time, the defender rose highest to thump his header past Martinez from Murphy's cross.

Aston Villa Jamaal Lascelles English Premier League Football
Get the latest updates on Fifa Worldcup 2022 and check out  Fifa World Cup Schedule, Stats and Live Cricket Score. Like us on Facebook or follow us on Twitter for more sports updates. You can also download the NDTV Cricket app for Android or iOS.