With top scorer Jamie Vardy suspended, his stand-in Ulloa stepped up with a brace of goals at the King Power Stadium, either side of goals by Riyad Mahrez and substitute Marc Albrighton.

It lifted Claudio Ranieri's side eight points clear of second-place Tottenham Hotspur, who host West Bromwich Albion on Monday, and means that they can claim the title by winning at Manchester United next Sunday if Spurs fail to beat West Brom.

Leicester's victory had the added effect of ending the title bids of both third-place Manchester City and fourth-place Arsenal, who were held to a 0-0 draw at struggling Sunderland.

Arsenal F.C. remain on course for a 20th consecutive top-four Premier League finish, but Arsene Wenger's men had to settle for a 0-0 draw at relegation-threatened Sunderland on Sunday.

The Gunners' hopes of catching second-place north London rivals Tottenham Hotspur diminished after they were unable to find a way past their former goalkeeper Vito Mannone at the Stadium of Light.

The point took them level with third-place Manchester City, five points clear of Manchester United, who have a game in hand, but was of more use to Sunderland, who climbed out of the relegation zone on goal difference. 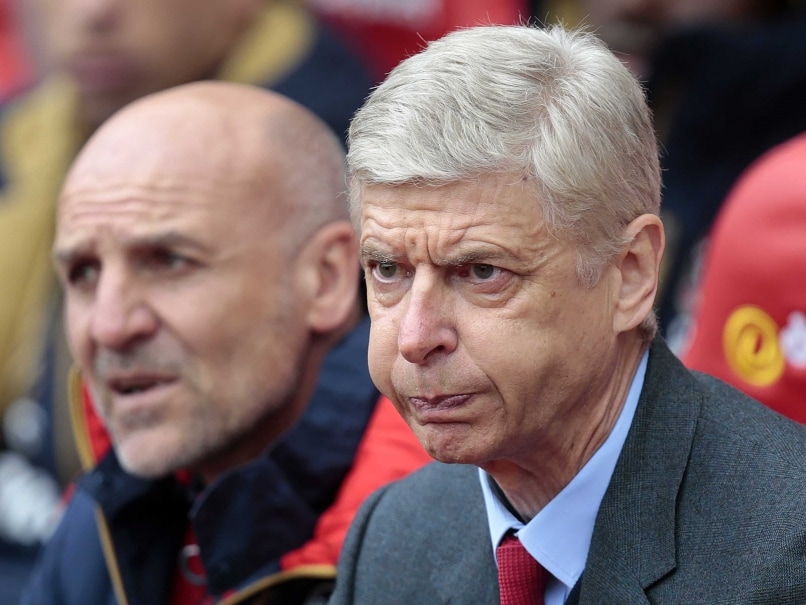 Arsenal manager Arsene Wenger has come under fire off late and the Frenchman's detractors would hardly be silenced by a largely listless display from his team.

Arsenal still look a decent bet to finish in the top four and reach the Champions League for an 18th straight campaign under Wenger, but the Frenchman's detractors were hardly silenced by a largely listless display.

Along with moving level with City, the other main highlight for Wenger was the return from injury of Jack Wilshere, as the England midfielder made his first domestic appearance since last season's FA Cup final after coming on as a late substitute following a lengthy injury absence.

Arsenal had the better of the first half in front of another 45,000-plus Stadium of Light crowd as Mannone excelled against his old club.

But they were decidedly second-best after the interval, and would have returned to the capital with nothing to show for their efforts had Sunderland shown a little more composure in front of goal.

In front of their billionaire US-based owner Ellis Short, the hosts came closest to breaking the deadlock before the interval despite being outplayed for long spells.

Former Chelsea defender Patrick van Aanholt saw his curling left-foot free-kick from 20 yards come back off the angle of post and crossbar after a foul on Jermain Defoe in a rare moment of first-half danger for the visitors.

For the most part, Wenger's side were on the front foot, but were unable to produce anything good enough to beat Mannone, who moved to Wearside in a £1.5 million (.2 million, 1.9 million euros) deal in 2013 after eight years with the Gunners.

-The Sunderland goalkeeper produced a string of fine saves, the stand-out of which was a full-stretch stop low to his right to keep out a long-range free-kick from Alexis Sanchez.

The Italian also showed his reflexes as he got down well to smother Mesut Ozil's deflected effort from 18 yards as Arsenal pressed for an opening goal.

They had strong penalty claims turned down shortly before half-time when DeAndre Yedlin charged down an Alex Iwobi shot with his arm, but referee Mike Dean was unmoved.

He had also allowed play to continue earlier in the half when a snapshot from Defoe struck Per Mertesacker on the hand from point-blank range inside the area.

Petr Cech had been largely a spectator in the opening 45 minutes, but found himself thrust into the spotlight as Sunderland enjoyed their best spell of the match immediately after the re-start.

The Arsenal goalkeeper saved well from Defoe's angled drive, before blocking the follow-up from Yann M'Vila.

He then had to dive full-length to his right to deny Wahbi Khazri as the Wearsiders gathered an attacking momentum.

Defoe sent a looping effort narrowly wide with Cech struggling to cover after an excellent through ball from Lee Cattermole, and Sunderland ought to have taken the lead inside the final 20 minutes.

Laurent Koscielny inexplicably ducked under Khazri's corner to allow the ball to run inside Arsenal's six-yard box, but Lamine Kone failed to anticipate what would have been a free shot from virtually under the crossbar.

At the other end, Mannone pulled off another fine save late on from Sanchez, but it was a rare moment of concern for the hosts as the attacking threat posed by Wenger's side diminished with each passing minute.