Arsenal coach Arsene Wenger has revealed that he almost signed a teenage Zlatan Ibrahimovic, scorer of all four goals in Sweden's 4-2 friendly win over England on Wednesday. 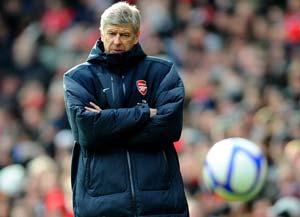 Arsenal coach Arsene Wenger has revealed that he almost signed a teenage Zlatan Ibrahimovic, scorer of all four goals in Sweden's 4-2 friendly win over England on Wednesday.

Ibrahimovic was shown around Arsenal's training facilities when he was 16 but Wenger said the London club were unable to conclude a deal for him.

"He came here to visit the training ground," Wenger said.

"He didn't want to make a trial because he was 16 years old at the time. He went home and we concluded to watch him again.

"I wanted to see him in training but it didn't stop him from making a great career. In the end, he chose to go to Ajax Amsterdam. That happens. He's not the only one in that case."

"I believe we are all amazed because, sometimes, when a guy has a shot from 30 yards and puts it in the top corner, you say, 'It's a fantastic goal' -- but somehow you believe you can do that as well, even if you cannot do it on a consistent level," Wenger told the Arsenal website.

"But when he scores a goal like that, you think it's impossible for a normal athlete. You have to be an exceptional athlete to do that.

"They say he's a master in kung fu. You could see that on Wednesday night. You need some special flexibility, subtleness and physical strength to do that, apart from the fact that you have to realise what you have to do.

"There's intelligence included as well. I'm an admirer of collective goals, but as an individual achievement, just you and the ball in the situation of the game, it is something exceptional."

Comments
Topics mentioned in this article
Football Arsenal Manchester City Alex Ferguson Mark Hughes Zlatan Ibrahimovic English Premier League
Get the latest Cricket news, check out the India cricket schedule, Cricket live score . Like us on Facebook or follow us on Twitter for more sports updates. You can also download the NDTV Cricket app for Android or iOS.