The defeat leaves Brian McDermott's side 17th in the table, two points clear of the relegation zone, while Stoke remain 10th despite the victory. 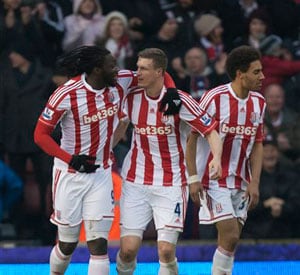 Robert Huth scored his first goal of the season as Stoke ended their wait for a first league win of 2013 by beating visitors Reading 2-1 on Saturday.

The hosts, who had not won in the Premier League since December 26, controlled the game from the start, but had to wait until the 67th-minute for German defender Huth to nod them in front from a Glenn Whelan corner.

Substitute Cameron Jerome doubled the lead after 81 minutes when the striker took the ball down neatly and turned his marker before smashing the ball home.

Reading, who have staged several late comebacks in recent games, kept their hopes alive when Jamaican defender Adrian Mariappa pulled one back with a header two minutes later.

But the Royals, unbeaten in four league games in an impressive recent run, could not pull off a last-gasp fightback.

In-form striker Adam LeFondre was sent on for Nick Blackman but his only impact was to go down in the box under a challenge from Ryan Shotton in injury time.

The defeat leaves Brian McDermott's side 17th in the table, two points clear of the relegation zone, while Stoke remain 10th despite the victory.

With Manchester United manager Alex Ferguson watching on from the stands ahead of his side's FA Cup clash with Reading, it was the Potters who made the stronger start at the Britannia Stadium.

Winger Matthew Etherington sent an early corner bouncing across the six-yard box, with Peter Crouch rushing in to meet it and just unable to apply a finish.

Crouch then managed to connect with an Etherington cross from the left but could only head wide under pressure from Mariappa.

Reading created an opening at the other end, with Mikele Leigertwood dragging an effort wide, but Stoke were soon back on the attack.

Michael Kightly saw his shot blocked by Mariappa just before the half-hour mark after he had drifted past Ian Harte into the area.

Stoke kept up the pressure as half-time drew near, with several Reading men throwing themselves in the way of a Huth strike to ensure it deflected behind, but the centre-back was not to be denied after the break.